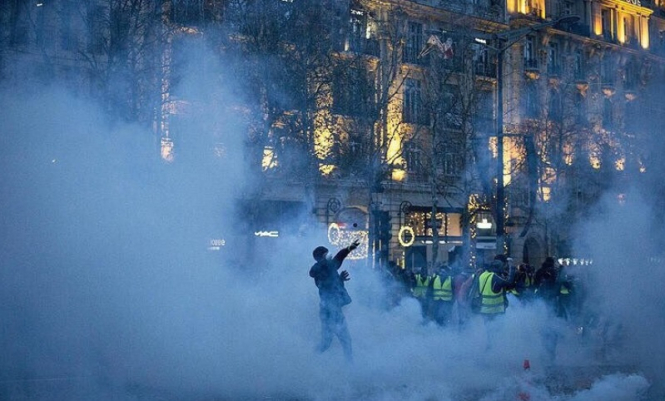 President Emmanuel Macron is expected to make an official statement on the situation tomorrow (Monday December 10), but has already tweeted his thanks to the law enforcement services working across France as the protests took hold.

Paris police also released photos of hundreds of items confiscated from protesters across the country.

Most of the objects were seized in railway stations, and at motorway péages near the capital.

Over 89,000 police officers and law enforcement agents - including 14 armoured vehicles - were present on the streets of France yesterday, as Paris and other major cities prepared for major violence.

Many tourist attractions, including the Louvre and the Eiffel Tower, were closed in anticipation.

By 10h on Saturday, police said that they counted 1,500 protesters on the Champs-Elysees, and final figures for the day have said that around 136,000 people participated nationwide.

Tear gas was used along the Champs-Élysées and other main streets in the capital to dispel protesters, and some CRS officers were required to hold back some groups in the capital.

Yet, early appraisals of the day suggest that the damage to buildings and monuments was not as severe as that of the previous weekend (December 1), and the violence was not as bad as feared.

The weekend had been dubbed “Acte 4” by protesters, in reference to the fourth consecutive weekend of Gilets Jaunes protests. Some groups are now calling for an “Acte V” next weekend.

Benjamin Cauchy, member of the “Gilets Jaunes Libres” movement, which has sought to distance itself from the worst of the violence, met Prime Minister Edouard Philippe on Friday.

He said: “I am waiting for [our demands] on buying power to be considered by the President. We want him to respond.”

PM Mr Philippe has said: “The time for dialogue is here. We must now re-weave together national unity.”

He said that the violence "must stop". He said that the President needed to reply to "certain legitimate demands" but said that the Gilets Jaunes should "stop calling on people to protest", as it risked "summoning rioters to smash [things up]."