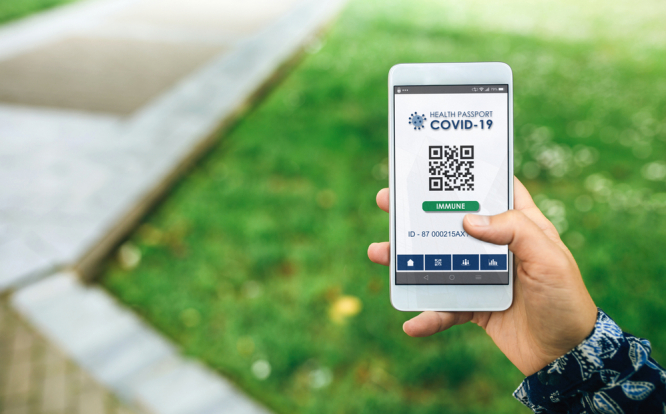 France’s ‘defender of rights’ has raised concerns about the democratic and freedom implications of the new health pass rules Pic: David Pereiras / Shutterstock

France’s ‘defender of rights’ has questioned France’s new health pass rules, saying they amount to “the checking of one part of the population by another”, and risk infringing the rights of children and poorer communities.

Claire Hédon, la Défenseure des droits, said she believed a “democratic debate” was needed in Parliament, as this law “is suggesting deep changes to rights and freedoms, which are really the foundation of our social and republic pact”.

She was speaking in an interview with FranceInfo.

The rules do not take children or vulnerable people into account, she said, and called for more democratic debate on the issue.

Ms Hédon said: “I recognise the importance of vaccination to fight against the pandemic but at the same time, I am rather questioning the method and proportionality of most of the restrictions. We have to react quickly, but that doesn’t mean we stop democratic debate.”

She said that the rules would see one part of the population checking the other – such as shop assistants and restaurant staff – “when this check should be done by public authorities”.

Ms Hédon said that the balance between the protection of public health and maintaining rights and freedoms must be carefully considered, especially when some parts of the population, especially younger people, have not yet had enough of a chance to be vaccinated, she said.

She said: “Restrictions on access to public transport, certain goods and services, leisure activities, restaurants, trade fairs, and shopping centres, are likely to hamper the daily life of many people.”

She added that “no measures” have yet been put in place for people who cannot be vaccinated due to medical reasons, for long-distance travel. She said: “Therefore, I have several concerns.”

France’s government spokesman Gabriel Attal said earlier this week that the government would provide clarity on measures for people who cannot be vaccinated for health reasons or due to pregnancy later this week. No update has yet been announced.

Parliament is set to debate a bill this week that contains measures to extend the use of the health pass and to make vaccinations obligatory for certain professionals, including health care workers and hospital staff.

Prime Minister Jean Castex has said that he hopes there will be a consensus on the bill by the end of this week, and that it will then be reviewed by France’s Constitutional Council.

Rights of the child at risk

On the subject of minors, she said that requiring children aged 12-17 to be vaccinated was not without its risks.

She said: “The specific situation of minors has not been taken into account. The benefit-risk assessment of vaccination for 12- to 18-year-olds is not at all identical to that of an adult.

“For minors aged 12 to 18, vaccination should remain solely encouraged and, above all, should not be a disguised obligation, just because the law says so.

“Access to leisure and culture is a right that is proclaimed by the International Convention on the Rights of the Child. It is not an extra right, it is really fundamental.”

She said that there are “real risks of infringing the rights of children” with the new health pass laws, and that “children have already paid a heavy price in this crisis”.

MPs on Tuesday (July 20) voted to delay until the end of September the use of the health pass for children aged 12 to 17. This measure could be debated against during the parliamentary debate on the bill that contains the health pass, and obligatory vaccination measures.

Ms Hédon also said that people living in poverty “risk being doubly victimised”, as tests will no longer remain free from autumn, and low vaccination rates are often more of an issue in deprived communities.

She said: “The government has announced that tests for people without symptoms will no longer be covered by health insurance, while the map of low vaccination rates overlaps with that of poverty, the digital divide and access to public services.

“These measures are likely to be even harder on the poor, they are likely to increase inequalities, and what additional resources are being provided to reach these people in poverty? That's what worries me at the moment.”

From today (July 21), the French health pass (pass sanitaire) will be required to access cultural and leisure venues, including cinemas, museums, theme parks, sports facilities, places of worship, conference halls and other venues that can accommodate more than 50 people.

To enter these venues, pass bearers will have to show a negative Covid-19 test result taken within 48 hours, proof of full vaccination, or proof of having already been infected with Covid-19 and being considered immune.

Protestors last week marched against extending the use of the health pass on the grounds that it was an attack on civil liberties.

What is the ‘Défenseur des droits’ in France?

The ‘Défenseur des droits’ is an independent administrative authoritative position in France, appointed by the president every six years.

They act as a kind of citizens’ rights ombudsman or watchdog, and are responsible for defending the rights of citizens and children, fighting against discrimination, and upholding ethics.

They cannot make laws, and report to the president and Parliament. But, as an independent body, the agency does not receive orders from the government.

It issues recommendations and statements, and can be requested to assist on issues by the president, prime minister, Parliament, or Senate.