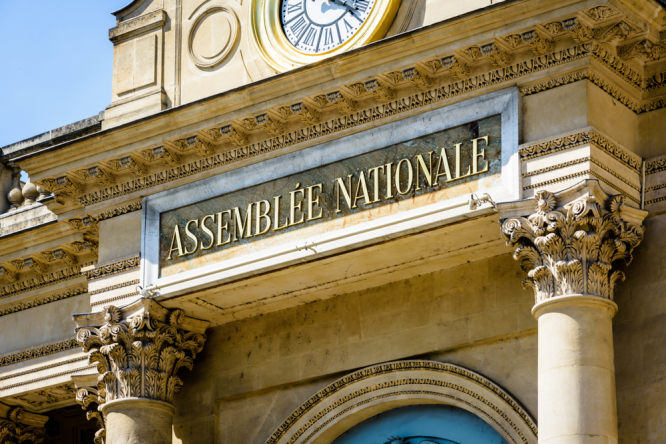 MPs debated the law in the chamber until almost 06:00, with more than 1,200 amendments in the final bill Pic: Olrat / Shutterstock

French MPs have voted to extend the health pass to restaurants and bars and to make vaccination mandatory for 70 healthcare professions.

The Assemblée nationale adopted the law today after debating the issues all last night. MPs voted for the text by 117 for to 86 against. The Senate will now consider the text today (July 23), with a view to adopting the bill by the end of the weekend.

The new rules are intended to encourage vaccination and combat the rising number of cases of the Covid-19 Delta variant.

If voted through by the Senate (as is expected), the rules will require workers from 70 professions to have a mandatory vaccine by September 15, and require the health pass to be shown in public spaces such as cafes, restaurants and bars with capacity for more than 50 people.

The pass will also likely be needed on long-distance public transport within France, and in larger shopping centres and medical establishments, “except in emergencies”, MPs said.

Managers, owners and workers, as well as customers, will also be required to have a valid pass.

Minors aged 12-17 will also be required to show the pass, but not before September 30, as vaccination for this age group only opened on June 15.

The health pass is already required for entrance to leisure and culture sites with capacity for more than 50 people, such as cinemas and nightclubs.

The terms of the bill were first announced by President Emmanuel Macron on July 12.

They have been widely criticised by MPs on both the left and the extreme-right. Debates on the bill started at midday on Wednesday, July 21, and ended last night towards 06:00, with almost 1,200 amendments added.

Two amendments were voted on for a second time towards the end of the discussions. These reintroduced the need to show the health pass for patients and visitors in hospitals (apart from in medical emergencies) and for visitors to care homes.

Especially controversial parts of the text included the possibility of workers being sacked if they refuse to get vaccinated and belong to one of the professions where it is required.

This was dubbed “a brutality” by MP Patrick Hetzel, and a “monstrosity” by MP Christine Pires Beaune.

Read more: Is there legal basis for France's obligatory health pass and vaccines?

Fines and sanctions agreed on include:

MPs also removed a rule that would have punished the use of a fraudulent health pass by an individual with five years in prison and a fine of €75,000.

The health pass QR code may be shown on the TousAntiCovid app by those who have scanned in their certificates and can also be shown in hard copy on paper.

MP Christophe Blanchet suggested the sanctions should fall on members of the public, saying: “The health pass has two steps: I show my QR code, which is checked by the person at the establishment; and secondly, I must scan the QR code on the establishment’s scanner, to show that I am in this establishment.”

He said that the onus – and risk of punishment – should not be on establishment owners and staff in case people fail to comply.

He said that imposing fines and the risk of imprisonment on individuals themselves were ways to “lighten the responsibility imposed on establishments, and give staff more time back, as they don’t want to spend all day checking up on clients”.

It comes after Prime Minister Jean Castex yesterday confirmed that staff will not be required to check the ID of customers. This will remain the preserve of the police and gendarmerie, he said.

Read more: France’s health pass does not have a photo so must we show ID too?

The new law will also require people who test positive for Covid-19 to self-isolate for 10 days, with random daytime checks possible by law enforcement. People will be allowed to leave for essential reasons between 10:00 and 12:00, or other times in an emergency.

Those who do not self-isolate risk a fine of €135 for a first-time offence.

Health Minister Olivier Véran repeatedly urged MPs to pass the bill, given the “gravity of the situation”, which is “worrying”, he said.

He said in the chamber: “We must legislate quickly. We all need a health pass as soon as possible.”

The most recent figures show that there were almost 22,000 new cases of Covid-19 confirmed in the past 24 hours. This is the highest number since May 5.