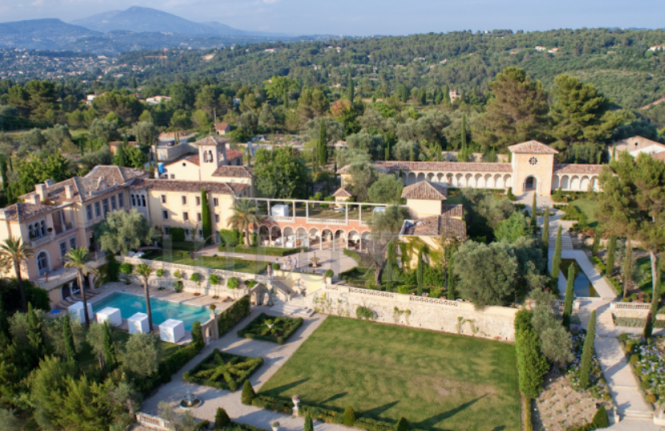 Chateau Diter has been ordered - definitively - for demolition, as it was found to have been built illegally
By Hannah Thompson

An infamous €57million French chateau that was built illegally in the Côte d’Azur has been definitively condemned for total destruction, in what is expected to be the final stage of a 15-year-long court case.

Chateau Diter was built by Montreil-born property developer Patrick Diter between the years of 2000 and 2011, and is set across a sprawling 3,000m2 near Grasse, in the Alpes-Maritimes.

On Tuesday December 8, the highest French administrative court, la cour de Cassation, upheld a previous ruling from the court of appeal in Aix-en-Provence (from March 25, 2019) and confirmed that the chateau had been illegally constructed, without proper respect for planning rules or environmental concerns.

Mr Diter now has 18 months to demolish the house and restore most of the land to its original state. He will be fined €500 for each day that the work is late. He - and his two commercial estate agency companies - have also been fined €450,000.

The chateau is built in a “neo-Renaissance style”, and includes a dovecote, turrets, a Moorish-style pavilion, a colonnaded gallery, a cloister, fountains, statues, a domed “temple”, palatial reception rooms, a large swimming pool, seven hotel suites, and a heliport.

Critics say that the property is built in a protected forest area, and that Mr Diter has illegally constructed a 650-metre-long path through the countryside, which - among several other dangers - is said to “turn into a mudslide” on rainy days, and helps to cause floods in the nearby village of Auribeau.

Mr Diter is also said to have held parties of up to 2,000 guests including oligarchs; with music played through up to 132 garden loudspeakers until 5am, and cars and helicopters constantly arriving / departing. This continued until this summer, when - due to Covid-19 - the house has only held one wedding with 200 guests, and four small concerts.

Local councillor Paul Euzière also said that Mr Diter had “not paid a penny in VAT, taxes, nor the €380,000 [owed] for being connected to the commune’s networks; not forgetting the fiscal procedures that have already seen his 4x4 seized”.

The property has also been used for luxury weddings (@adam.alex / Instagram )

Mayor Jean-Pierre Leleux ordered work to be stopped in November 2005. Mr Diter’s neighbours, Anne-Marie Sohn; and wealthy hedge-fund managers, Anglo-French couple Caroline and Stephen Butt, complained to the courts in 2008, and again in 2013.

In May 2016 and in April 2017, Mr Diter appeared in court in Grasse. He said: “It is my life’s work, my passion. I, who do not have a family, wanted to create a family-style home. I fell in love with an Italian [woman] and Italy, and I wanted to create a Florentine palace.”

He admitted that he had “forgotten” to ask for planning permission, and had ignored previous fines and injunctions from the council and prefecture, which had attempted to stop the work. He was also found to have falsified building permits.

After this week’s ruling, Ms Sohn said: “This has been a long 15-year fight. We are still waiting for the state to make this decision happen.”

Mr Diter’s lawyer, Me Louis Ribière, said: “Of course, Mr Diter is stunned and destroyed [by the decision]. However, the procedure is not yet administratively complete, because in a ruling of June 19, 2020, the Conseil d’Etat made [yet] another analysis of the building permit obtained in 2006.

“I am therefore studying the consequences of this [apparent] contradiction between the two highest courts in France.”

Despite the controversy over the property, Mr Diter’s eccentricity, wealth, and the “glamour” of the chateau and court case have seen the flamboyant couple portrayed positively in numerous media outlets.

In 2017 and 2019, Paris Match published positive profiles of Patrick and Monica Diter, asking the question: “Must we demolish the chateau Diter, this sumptuous residence born of constructive genius, eccentricity - and megalomaniacal delirium? - of Patrick Diter?

“Should builders throw down the walls of this majestic palace, [despite it being] illegally erected over the years?”

Similarly, the chateau has been used as the location for many luxury weddings, catwalk events and high-profile parties, and was featured as “Villa Carmella” in the lavish Sky Atlantic TV drama, Riviera - which starred US actress Julia Stiles as the widow of a shady businessman, whose eccentric and troubled family was based at the chateau.