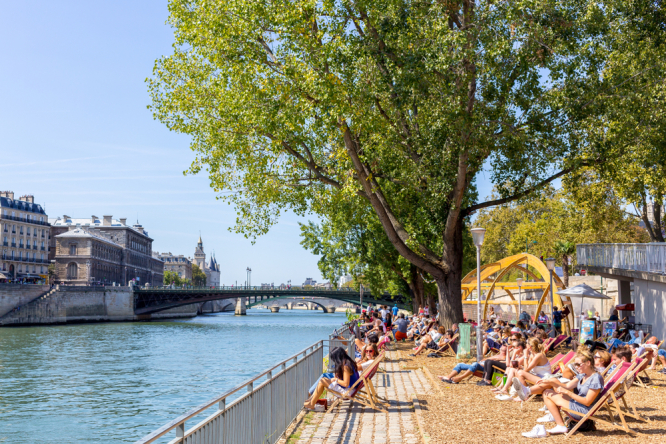 A ‘refreshing bench-fan’ that pulls cold air from underground and filters it up to those seated on the bench is being trialled in Paris.

The ‘climate bench’ is a prototype. Made of stone, it has vents along its sides and top, which blow cold air through them to cool users down.

The bench is currently being trialled in the Place Jeanne-d’Arc in the 13th arrondissement, and is set to stay in place until September 15. The €19,000 cost has been paid for by Faire, a group that facilitates the launch of innovative architectural and urban inventions.

Designer of the bench, Emma Lelong, told FranceInfo: “We chose a chalky, marble-like stone from Bourgogne, which has ‘effusivity’ properties, meaning that it stays cool to the touch, even during heatwave conditions.

“Working with this material allowed us to create modular systems, which do not block the public space.”

Engineer Arnaud Sanson explained that the air is around 20C on average, and pumped through the bench via existing pipe networks in the Paris underground. The fan turns on automatically when the outside temperature rises higher than 25C.

He said: “A fan sucks air from 10 metres underground, and comes to blow it in the bench, which is hollow. The air travels through all its holes. There is really a sensation of a ‘cold cushion’.”

After September 15, the bench’s performance is set to be evaluated by Frédéric Blaise, the urban architect who spearheaded the project.

He said: “We had this idea, similar to the Wallace fountains at the beginning of the 19th century, which brought drinking water to residents at a time when not everyone had access to it.

“We have this problem of urban heat sinks, and we wanted to find an effective solution that we could put in place quickly and improve services during heatwave periods.”

It comes as cities become ever-hotter due to rising summer temperatures, which has been partly attributed to climate change.

Temperatures are currently at 31C in Marseille, 29C in Montpellier, and 28C in Nice.

An official ‘canicule’ is declared when temperatures are sufficiently higher than average for the region over three consecutive days and nights.

15 hours ago
5
What income must Britons show for a six-month visitor visa for France?