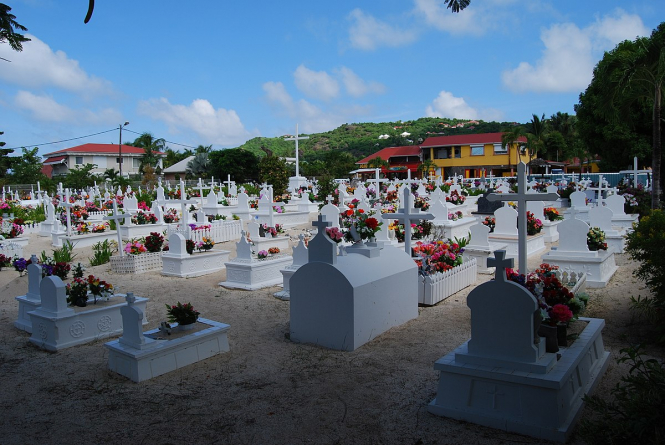 The location, in the Lorient cemetery on the island, was chosen as it is the last place Hallyday lived before his death, and where he owned a villa, reports French news source 20 Minutes.

The funeral hearth is said to have landed on the island at around 16h30 local time (21h30 French time), Monday afternoon, surrounded by the singer’s family (although reports say it had been delayed due to someone in the party being taken ill earlier).

As with the funeral procession that took place in Paris last weekend, there were also a number of riders on Harley-Davidson-style bikes present at the actual burial, in homage to the singer’s love of motorbikes.

Access to the cemetery was restricted by a 100-metre cordon.

Everyone present wore white, which is the colour of mourning in the Antilles islands.

Between 60-80 people were thought to have attended the event, including Hallyday’s wife Laeticia and the couple’s daughters Joy and Jade, as well as the star’s manager Sébastien Farran, and his guitarist Yarol Poupaud.

Actor Jean Reno was also thought to be in attendance.

His death was confirmed by a statement issued by his wife Laeticia, with public tributes coming from high-profile figures including President Emmanuel Macron.

The star’s funeral - an “hommage populaire” - took place in Paris last Saturday, including a public procession featuring 700 Harley-Davidson riders, of which one rode Hallyday’s own former motorbike - a blue Harley-Davidson Softail Springer 89.

Over 800,000 people are thought to have lined the streets to pay their respects to the singer.