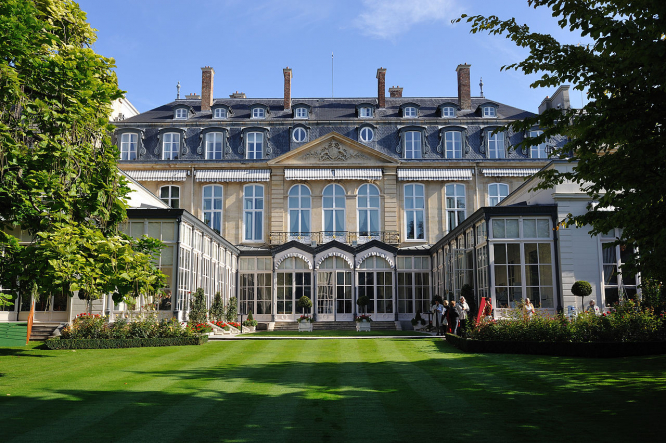 The Hôtel de Charost was bought by the Duke of Wellington, on behalf of the British government, in 1814. He was the first British ambassador to live there Pic: Croquant / Wikimedia Commons

The UK’s new ambassador to France Menna Rawlings opens the doors of her private residence to the public today (September 18) as part of this year’s European Heritage Days (Journées du patrimoine).

Ms Rawlings took up the post of ambassador on August 23, and lives in a private residence close to the Elysée Palace, at 39 rue du Faubourg Saint-Honoré, in the 8th arrondissement of Paris.

The British Embassy is next door, and a grass tennis court separates the two buildings

The ambassador's residence at The Hôtel de Charost has in the past welcomed illustrious visitors such as writers Oscar Wilde and Marcel Proust, political theorist Madame de Staël, and socialite Juliette Récamier.

Somerset Maugham, the English playwright and novelist, was born in an upstairs room at the residence in 1874.

Maugham's parents, who were well-connected, chose for him to be born there so that he could be born British, and not French.

The Hôtel de Charost was built in 1722 by Antoine Mazin, also the architect of Matignon, the French prime minister’s residence.

After the French Revolution, it was sold in 1803 to Pauline Leclerc, sister of Napoleon Bonaparte.

It has undergone major renovations. In 1814 the building was bought by the Duke of Wellington, on behalf of the British government, who was the first ambassador to live there.

For those who cannot visit the residence this weekend, a virtual visit is possible until October 18. This has not yet been updated on the culture ministry’s website but should later be available at this link.

The in-person visit to the building is free and will be open until 16:00 today (September 18).

European Heritage Days (Journées du patrimoine) is an annual event that offers the public the chance to visit buildings, monuments and sites, many of which are not normally accessible to the public

Read more: 8 ways to appreciate French heritage (and for free) this weekend

In addition to the usual emblematic places, such as the Elysée Palace, many other buildings are opening their doors this weekend in France, with some limitations due to health restrictions.

France’s culture ministry has an online interactive map so that you can see what other buildings are open to the public.

For example, in Le Havre, in the Seine-Maritime region, the Normandy Cinema is opening its doors and revealing its completely renovated art-deco façade.

In the Var, the city of Hyères is offering an historical tour of the centre, starting from Place Clemenceau.

Elsewhere, in Beillé (Sarthe), an English steam locomotive, unique in France, will be on show for the public.