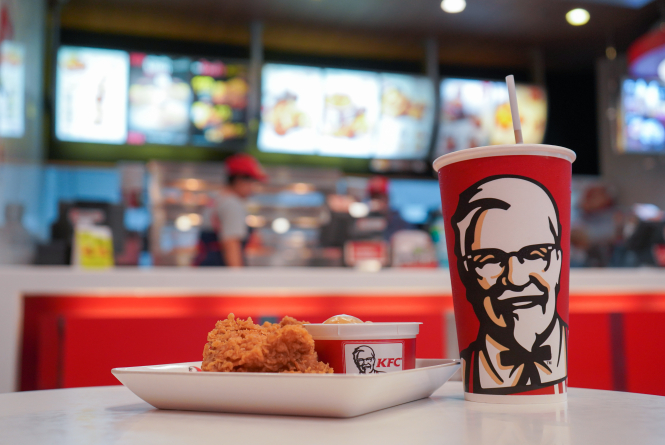 Will KFC customers be swayed by the Nutri-Score system? Watch this space. Pic: NP27 / Shutterstock

KFC’s fried chicken restaurants are the latest to sign up to the Nutri-Score system designed to give customers greater insight into nutrition – but critics say that excess food labels are actually devaluing the quality of information given.

Products available through KFC’s order terminals will now be accompanied by ratings from A (green) for the healthiest options, to E (red) for those at the other end of the spectrum.

The brand’s famous bucket of chicken has been given a C (amber) rating, as have the majority of its burgers, according to FranceInfo.

These ratings are based on the amount of fibre, protein, sugar and salt the foods contain, but also take into account how calorific they are.

The Nutri-Score system was created by French health authority Santé Publique France and first implemented in 2017.

While the labels are currently used on a voluntary basis, the European Union wants to introduce an equivalent food rating system for all member states in 2022.

The food chain McDonald’s joined the Nutri-Score initiative in May 2021.

Too many labels, not enough real meaning

However, the increase in labels now being applied to food – to denote everything from nutritional value to environmental credentials – has prompted consumer and environmental organisations such as Greenpeace, the WWF and UFC-Que Choisir to investigate their real worth.

Greenpeace alleges that there are ‘major gaps between the promises being made by some labels and the reality’, it said in a press release yesterday.

The campaign group said: “Food labels and approaches are supposed to give consumers guarantees in terms of product origin, environmental preservation or locality, and should also be exemplary in terms of responsible consumption criteria.

It called for “the allocation of public aid to be conditional on a real guarantee, regarding the environmental and socio-economic impacts”.

Among the labels included in its investigation were Label Rouge and cheese with PDO (Protected Designation of Origin) status.

Greenpeace said discrepancies between labels could be attributed to “a major dysfunction” of the French certification system, which includes the INAO institute.

INAO is tasked with ensuring the compliance of quality and origin, but is unable to compel professionals to modify their products to meet the rules.

Greenpace said: “The committees in charge of examining the specifications have an overwhelming majority of professionals [on their team], to the disadvantage of representatives of the administration and consumers.

“Almost all of the controls to verify the conformity of products are delegated to control bodies with close ties to professionals in the sector,” it added.