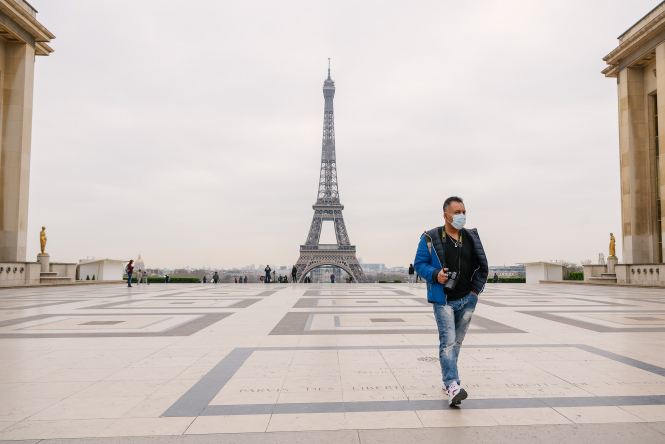 Areas where social distancing measures are hard to implement have been targeted.
By Joanna York

A total of 105 roads, waterside quays, and busy markets will be subject to the new rule. These include the banks of the river Seine, Canal Saint-Martin and Montmartre.

The Paris Prefecture de Police has released a map and a full list of areas concerned in the capital, organised by arrondissement.

Signs at entry and exit points will also indicate areas where masks must be worn in the capital.

As well as those working and living in designated zones, pedestrians, cyclists and those riding kick scooters must put on masks when passing through. Those who do not wear masks in designated areas could face a fine of €135.

Response to rise in Covid-19 cases in Paris

In a statement, the Prefecture de Police said that the new measure has come in response to a rise in Covid-19 cases in the capital, and is being implemented in areas in which “respecting social distancing measures is difficult”, in order to reduce the risk of the disease being transmitted.

The statement says that the new rule will be in place for the coming month, subject to amendments as the situation evolves.

Mayor of Paris Anne Hidalgo has also expressed her support for mandatory mask-wearing in the the city. Mayoral deputy and head of security Nicolas Nordman told news source AFP that busy areas “where social distancing measures may have been relaxed” in recent weeks have been targeted.

To the west of Paris, 26 communes in Hautes-de-Seine have also introduced mandatory mask-wearing from today along with 18 communes in Val de Marne, to the south-east.

These include the public areas in La Défense (including the station) and areas along the river Seine amongst others.

In a joint statement, the Prefectures de Police for Hautes-de-Seine, Val de Marne and Seine-Saine-Denis confirmed that obligatory mask-wearing had been introduced to combat rising cases in the region. They cited data showing the current rate of Covid-19 tests coming back positive in Ile-de-France was 2.4% on average, compared with 1.6% nationally.

The statement also said recent incidences of the virus were most significant among 20-30 year olds.

Val de Marne has been particularly affected by the virus in recent weeks. Figures from the last week of July show the average rate of Covid-19 tests coming back positive was at 2.7% in the department.

Additionally, the recorded number of Covid-19 cases per 100,000 people in the department was 27 on August 8. In France, a number above 20 per 100,000 is over the seuil de vigilance (alert threshold), indicating the area may be at risk of a resurgence of the virus.