Cookie Consent by FreePrivacyPolicy.com Plans for mask-wearing at work from end of August in France French News and Views in English | The Connexion
15 may 2021
Classifieds Currency exchange Newsletter
Login Register BASKET
Facebook Twitter 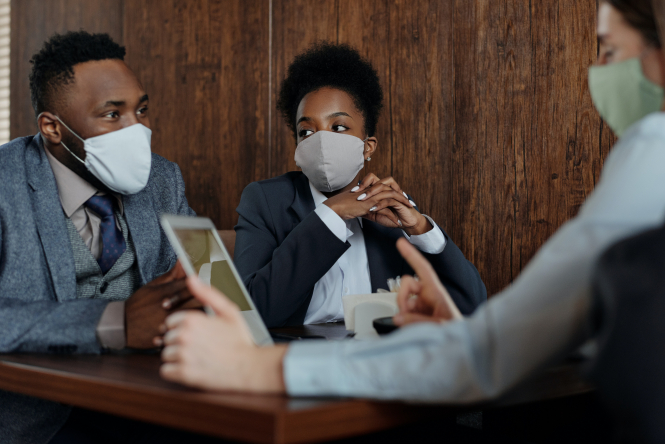 Unions have unanimously demanded that employers, rather than employees, shoulder the cost of providing workplace masks.
By Joanna York

As confirmed cases of Covid-19 continue to rise in France, official figures show that nearly a quarter of new infections happen at work.

Ms Borne’s plans include making masks mandatory in meeting rooms that do not have natural ventilation and areas in workplaces where people circulate.

The minister said in an interview with news source Le Journal du Dimanche that other health measures to stop the spread of Covid-19 at work may also be implemented. Specifically, she will consult advisory body the Haut Conseil de Santé Publique over the use of Plexiglas screens to protect workers in open space offices.

Ms Borne said changes to current guidelines would be made based on “what [the government] has been able to observe in professional clusters”.

However, in a meeting on Friday (August 14) unions expressed worry that the new plans may prevent people being able to do their jobs properly and pointed out government guidelines for workplace safety are already 90 pages long.

Unions also unanimously demanded that employers, rather than employees, shoulder the cost of providing workplace masks once they are obligatory.

In the interview, Ms Borne also stressed the need for remote work “wherever possible” in active circulation zones, like Paris (Ile-de-France) and Marseille (Provence-Alpes-Côte d’Azur).

Mask-wearing is currently obligatory in some public spaces in the two cities - such as markets, busy roads and the Marseille coastline.

He said: “We need to continue to education people, but we need sanctions too.

"French people need to be less scared of the fine or the sanction than they are of the virus itself. What should be feared is not the police, who may issue you a fine, but the virus that might contaminate you if you do not respect social distancing measures."

Meanwhile, more cities and communes in France have made masks obligatory in public places.

People who do not wear a mask in a public place when required to do so face a fine of €135.