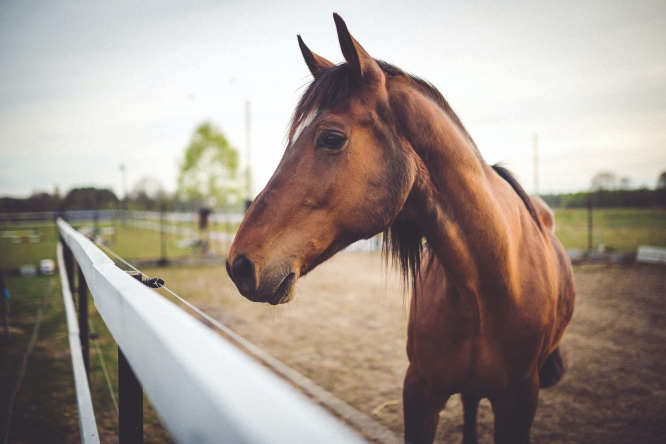 Police have warned horse owners against “vigilantism” or “taking the law into their own hands".
By Connexion journalist

The officers and helicopter were deployed in Losne, in Côte d'Or (Bourgogne-Franche-Comté), on Saturday night, September 6, after a horse owner reported that there had been an intruder in his field, where a horse had been found injured.

The owner noticed lights coming from the field at about 02:00, and notified the gendarmerie, who sent 40 officers and a helicopter, as well as a canine team. Investigators are now looking for two men in connection with the incident.

The prosecutor’s office in Dijon told the Agence France-Presse: “A horse was wounded on its side. It was a very deep injury, according to the veterinary examination.”

The gendarmerie are now working with neighbouring departments on the case, including researchers in Beaune, as well as regional teams in Dijon.

The case comes as another mare was found dead and mutilated on Saturday, in the Cantal (Auvergne-Rhône-Alpes). The owners found the animal “disemboweled, with an ear cut off, and her udders cut off”, said the prosecutor’s office in Aurillac. An autopsy was done to ascertain if the injuries were inflicted before or after death.

The Val-d’Oise department (Ile-de-France) recorded its first cases on Saturday too - in the rural commune of Grisy-les-Plâtres in Vexin. One mare was found with mutilated genitals, and another with a 30-centimetre gash on her side. Both animals survived.

Interior minister Gérald Darmanin and agriculture minister Julien Denormandie have visited the Oise (Hauts-de-France) today (Monday September 7), to show their support for the horse owners affected by the attacks.

Serge Lecomte, president of the horse federation la Fédération Française d'Equitation, commended the efforts being made to raise awareness of the growing issue.

He said: “This is a first. That two ministers would visit due to a concern over cruelty towards animals, that shows a real move towards awareness among the public, and among law enforcement, for them to quickly find a solution. Bravo on the efforts being taken.”

Mr Lecomte said that the attacks were “deranged”, and said that “cruelty towards animals was not new”. He added: “We are all frightened. Everyone is very worried about this crazy cruelty.”

More than 30 attacks have now been reported across the country. Police have not been able to identify a singular motivation behind the attacks, with some suggesting they could be linked to satanic rituals, some kind of internet challenge, “trophy hunting”, an act of “animal haters”, or even “copycat killings”.

Investigators have said that the attacks are likely to be the work of more than one perpetrator, as they are too widespread for them to be done by one individual or team. Similarly, the types of injuries suggest that the attackers have some kind of knowledge of anatomy or veterinary skills.

The minister for the interior has said: “Even though there is not yet any clear sign of a formal link to any sectarian movement, some incidents appear to be linked to sectarian rituals, especially satanic [practices].”

Yet, the Miviludes are remaining cautious. In a statement, it said that “voodoo [and satanic rites] usually concern small animals, and not horses” and that “satanic rituals are out of fashion...there is potential for violence among these groups but we have not seen it for years”.

This lead is just one of several being considered by police.

Worried owners have reportedly been sleeping near their horses in their fields, keeping watch; installing cameras and lights across their properties; or even bringing their animals into their back gardens in a bid to keep them close and out of danger.

But even as the number of cases continues to increase, police have warned owners against “vigilantism / taking the law into their own hands”, and have reminded people to report anything suspicious to the local gendarmerie.