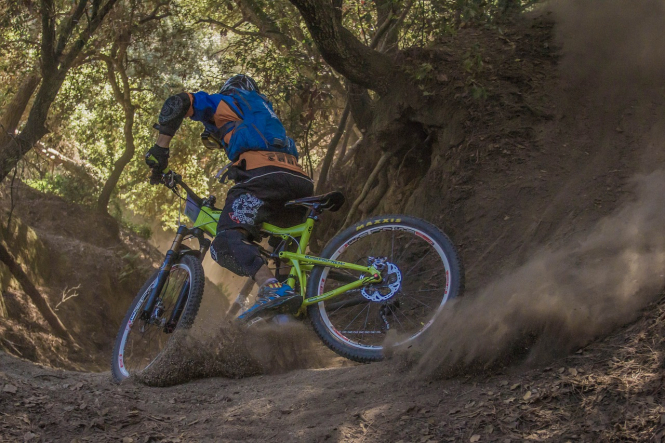 The biker was taking a route near Saint-Hilaire du Touvet in the Chartreuse mountains (Isère in the Auvergne-Rhône-Alpes), north east of Grenoble, when he crashed for no apparent reason.

Speaking to local news source France 3, he said: “There was a wire suspended across the path, from one side to the other. It was invisible, at human height. I smashed to the floor...but I was on a hill start, so was going very slowly. If I had hit it coming down [at speed], I could have been beheaded. Even a hiker walking down could have hurt themselves very badly.

“The wire was very thin but very strong - I couldn’t break it with my hands - and it was invisible. I only saw it when I passed by a second time. It was in a bend, and kept at face-height by a pole hidden in the bushes.”

The motorbiker then alerted the gendarmerie, fearing that there could be more “of these kinds of traps in the area”.

He said his location had specifically been: "On the trail starting from Petite Roche, passing by the top of the ski slopes to the source of Le Sanglier, which then goes down to the Col de Marcieu, towards the trail up to the slopes of the Aup du Seuil”.

Now, French biking association the Mountain Bikers Foundation (MBF) is warning all bikers to be alert, “especially in the Saint-Bernard commune, between the Col de Mercieu and up to the Aup du Seuil”.

The warning said: “Following this report, we have immediately informed le Conseil Départemental, which has forwarded the information to the Parc de Chartreuse, the wider community, and the tourist office at the Plateau des Petites Roches, which is in charge of leisure activities in the area. A park officer must now visit the area to check if there are any [dangerous] items on-site.”

The MBF reminded bikers that the smartphone app “Suricate” allows sportspeople to report, in real-time, any issues or problems found on trails or paths, allowing other users to remain alert.

It added: “This is not the first time that we have had issues like this.”

Elsewhere in France, in 2015, an elderly man was sentenced to nine months in prison for a similar act, which saw him deliberately installing unsafe nails and “cable traps” in the commune of Saint-Jean-de-la-Blaquiè (Hérault, Occitanie).