Mystery seeds from China sent to people in France 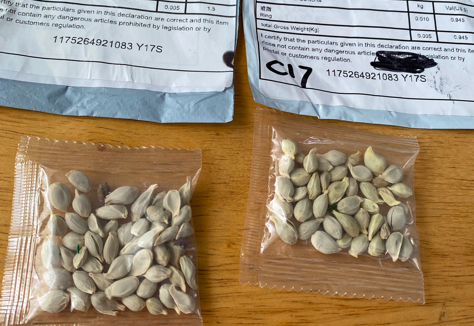 The seed packets have also been sent to individuals in the US, Canada, UK and Israel.
By Joanna York

In a tweet, the French ministry for agriculture and food revealed the packages had been received by individuals in France in July. It warned that the seeds could carry illnesses not present in France, or be invasive species.

In a statement, the ministry said: “Above all, it is essential not to plant them.”

Individuals who have received seed packets are advised to “place them in a plastic bag, then throw the bag (sealed so it is airtight) in your household rubbish bin so that the seeds are destroyed”.

Anyone who has touched the grains should “clean their hands well and disinfect any object that has been in contact with the seeds”.

The ministry has also requested that people who receive seeds in France take photos of the postage label, packaging, and the seed packets, before throwing them away.

For more information, recipients can contact the office for agriculture (Direction Régionale de l'Alimentation, de l' Agriculture - DRAFF) in the region they live in.

Mystery seed packets sent to other countries too

Individuals in the US, Canada, UK and Israel have also received mystery seed packets from China.

It is suspected they have been sent as part of a “brushing” scam.

"Brushing" is a type of scam that sees e-commerce sites or individuals - who are not affiliated with official commerce sites such as Amazon, but sometimes use their platform to sell goods separately - sending unsolicited items to fake buyers, using real addresses that belong to someone else. After the items have been sent, the fake buyers are then invited to write positive reviews to artificially boost the seller's online profile and increase sales. Meanwhile, inhabitants at the real addresses receive surprise packages they did not order.

Sellers can also send products as unsolicited gifts to consumers in the hope that receiving free products will result in them leaving a positive review.

Brushing is a common scam on online marketplaces such as Amazon.

The best plants to grow in France to deter mosquitoes