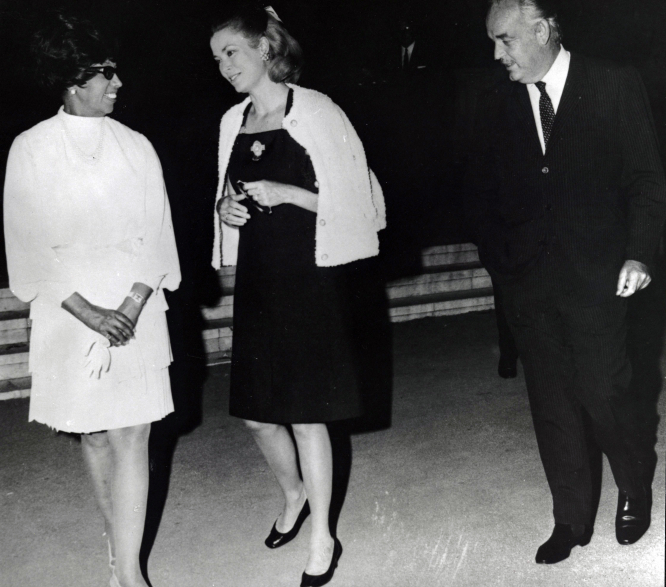 A new square on the seafront in Monaco pays tribute to one of France’s most loved American celebrities – Resistance heroine and humanist Joséphine Baker.

Place Joséphine Baker was named by Prince Albert’s government in recognition of her special relationship with Monaco and his mother Princess Grace.

The square on the promenade overlooking Larvotto Beach on Avenue Princesse Grace is due to be open by Christmas.

Baker was recently honoured with a place in the Panthéon, France’s tomb of heroes – the first black woman to be there.

Baker died in Paris in 1975 and is one of few foreign-born figures at the Panthéon.

She was honoured for her Résistance and civil rights work with a cenotaph and plaque, due to be installed on November 30. Her remains, however, will stay in Monaco’s cemetery at her family’s request.

Prince Albert of Monaco told Nice-Matin: “It is an extremely important recognition to enter the Panthéon, but it will be a cenotaph. It is important that the body remains in the principality to establish definitively this very strong link between my mother, the principality and Josephine Baker.”

The link between them began thousands of kilometres from Monaco one October evening in 1951 when Baker, a world famous singer and dancer, was refused service at the glitzy New York restaurant the Stork Club when visiting the city to receive the Woman of the Year award from the National Association for the Advancement of Colored People.

She had moved to Paris at the age of 19 to escape racism and further her stage career so, when denied service to eat, she refused to leave quietly and called the press to come and cover her stroming out. The resulting articles led to protests outside the club for months.

Grace Kelly was at that time an up-and-coming star in Hollywood. She had earlier that year landed her first major role in a film, High Noon, and became a household name overnight.

She later told how she was at a table in the restaurant and was struck by the way the woman – she did not know who Baker was at the time – provoked a scandal.

In 1982, shortly after the death of Princess Grace the journalist Jacqueline Cartier, wrote in France Soir Magazine that the princess had told her: “At the time [the restaurant event in 1951] I was so shy... and I remember asking myself the question: ‘In her place, would I have had this courage?’”

She said she never got the chance to tell her friend she was there.

Born Freda Josephine McDonald in 1906, Joséphine Baker took her name when gaining French citizenship in 1937 after becoming a star in burlesque revues and the Folies Bergère in the 1920s. At the start of the World War Two, she approached the French intelligence proposing that she used her reputation as a performer to travel around Europe mixing with Germans to gather information and pass it on.

She also used her home, Château des Milandes in Dordogne, to help people flee France to join the Free French.

In the 1970s, Princess Grace helped her friend when Baker, burdened with tax debts, was evicted from the chateau she had shared with her 12 adopted children.

Princess Grace offered her a villa in Roquebrune-Cap-Martin, near Monaco, where she could live for the rest of her life with her family. She also helped her to get her singing career back on track, offering her the chance to perform on stage for charity in Monaco, as well as helping to finance a Parisian concert to mark the 50th anniversary of Baker’s career.

Baker, 68, died from a brain haemorrhage, a few days after a concert. Princess Grace was at her funeral.

The decision to honour her at the Panthéon came directly from President Macron after a petition of 38,000 signatures called for her to be interred there.

Two remarkable pilots whose lives both took flight in France