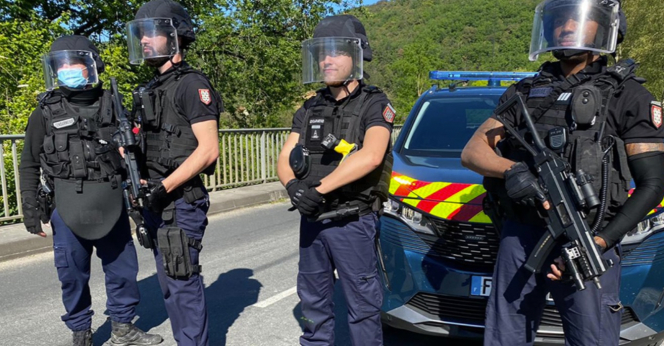 Gendarmes on the streets of Lardin-Saint-Lazare at the height of the manhunt Pic: Gendarmerie nationale / @Gendarmerie / Twitter

Normal life is resuming in a Dordogne village after a heavily armed former soldier was shot and detained by police following a 36-hour manhunt during which time the local population was in lockdown.

The school in the village of Lardin-Saint-Lazare reopened on Tuesday, June 1, after being closed while gunman Terry Dupin, 29, was at large following a domestic incident at the weekend that turned violent. He was 'seriously injured' in an exchange of gunfire with police on Monday afternoon and detained.

Villagers admitted to being scared during the police lockdown. "We barricaded ourselves, because we knew the person in question, the fugitive, could have been around the corner," one told BFMTV.

"I kept looking at my phone to find out where it [the situation] was with the person they were looking for, but it's true that I was still afraid," another said.

The department's prefect Frédéric Périssat thanked villagers for their 'civic-mindedness' during the day-and-a-half search for Dupin.

"The confinement instructions were really well followed," he said. "The local elected officials, with whom we were in very regular contact, also played the game.

"Our concern was above all to keep the population safe, to avoid any gunfire in the direction of the public," he added.

With the dangerous stand-off now over, Mr Périssat said that businesses and schools would be able to reopen from Tuesday. But, he added: "There is an area where forensic investigations will continue, to determine the exact route of the individual during these 30 hours."

Stéphane Roudier, mayor of the neighbouring commune of Condat-sur-Vézère, where Dupin was finally detained, said: "It was intense for people."

He also thanked "the population for having been patient and respecting the instructions, for having shown patience and understanding."