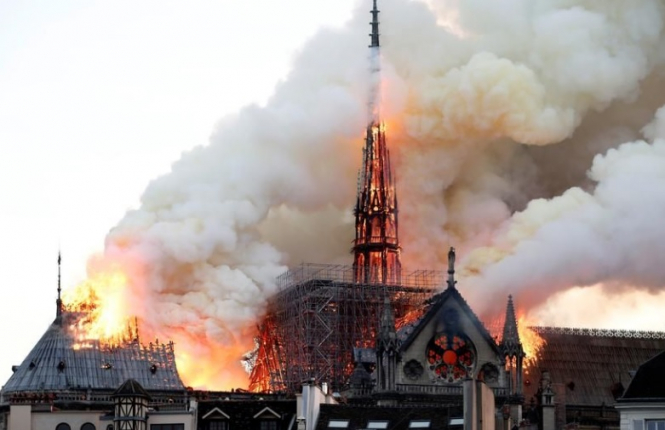 Notre-Dame de Paris was engulfed in flames on April 15, eventually leading to the collapse of the spire and much of the roof
By Connexion journalist

Architect-in-chief Philippe Villeneuve was able to enter the cathedral for the first time this week, after its access had been forbidden in the wake of the devastating accidental fire that destroyed the spire and most of the roof.

Mr Villeneuve made the visit to ascertain the extent of the damage and seek to begin plans to rebuild the ravaged monument.

His first reaction to the destruction - which now includes multiple piles of rubble, and a lingering smell of burning - appeared severe. He said: “This is a huge injury, a terrible suffering, such a bewildering nightmare.

“Straight away, I wanted to get as close as possible to the cathedral to try to understand and to try to take part in this rescue operation.”

The architect explained that the clear-up and rebuilding proceedings would be slow and careful, and would need to be done bit by bit, starting with the most urgent priorities first.

He said: “The most important thing is to safeguard the weakest elements; the vaults, and the pieces under canvas. There are bits of wood that are at risk of falling, and it is very dangerous. People should not go in.”

The cathedral is closed to the public, and under continued surveillance. Builders have been working to secure the structure to limit any further damage and prepare it for eventual reconstruction plans.

Mr Villeneuve said: “We must know how the monument behaves, so we can re-stabilise it, recharge it, and put the fundamental elements back in place. The cathedral is sick, we have diagnosed the need for significant surgical intervention, now, as surgeons, we will heal her.”

Speaking of the famous spire, which collapsed during the fire, Mr Villeneuve said: “Everyone agrees that the spire was a masterpiece by [designer] Viollet-le-Duc, and I agree...but I remind you that we saved the bronze statues and we saved the spire topper. So for me it’s obvious: we should restore it.”

It has been estimated that the rebuilding effort will take at least five years, and cost hundreds of millions - if not billions - of euros.