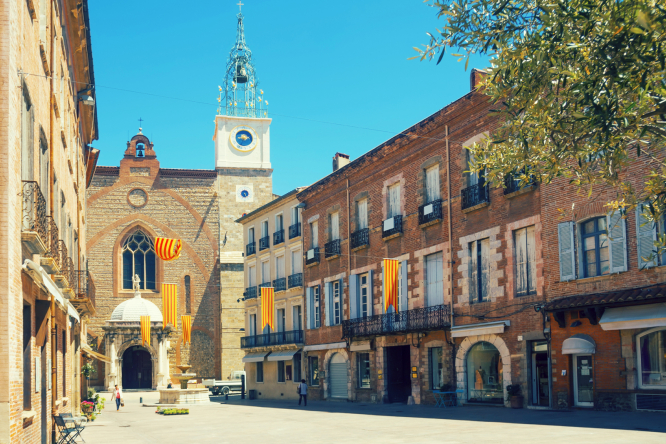 Applicants who live in Perpignan, which falls under Montpellier, have said that their dossier took more than four years to go through the various stages of completion for nationality Pic: Iakov Filimonov / Shutterstock

The timeframe for obtaining French nationality is a postcode lottery, taking between one and four years.

One family even reports it considering moving from the south to Paris to speed it up.

According to the Code Civil, the time for a decision on an application for naturalisation should be no more than 18 months after the applicant has received a récépissé (receipt) acknowledging delivery of all required documents.

However, this seems in many cases to be interpreted as starting only after police checks have been done and the applicant has been called in for an interview.

A final récépissé is then given confirming the application is complete, but this may come years after the person has received a letter acknowledging receipt of their paperwork and registration of their dossier.

Naturalisation is the basic route for people with no French family links to become French.

People with an automatic right through family links apply ‘by declaration’. Applications are processed initially at prefectures before being sent to the Interior Ministry for the final say.

After examining dozens of timelines online, we found the shortest wait for naturalisation was one year for a Briton living in Paris whose dossier was submitted to the Préfecture de la Police de Paris in August 2020.

Another new French citizen in Paris said their application took 14 months. This is in contrast to other departments.

An applicant from Aude gave her dossier to Hérault prefecture in Montpellier in December 2017 but was not granted citizenship until July 2021.

Another, from Perpignan, which also falls under Montpellier, said his took more than four years, from his dossier being submitted in 2017. In Nice, Alpes-Maritimes, the process has been taking about three-and-a-half years.

If you apply by naturalisation, you are asking to become French. You must have lived in France for at least five years, have “sufficient and stable resources”, show your integration into the French way of life, and speak French to a certain level. Police checks and an assimilation interview at the prefecture are required.

One person from the Alpes- Maritimes said she has been waiting two-and-a-half years since sending her documents and swiftly receiving a letter acknowledging them.

“They told me this summer they were just starting to process applications from the end of 2017. I was excited about the chance to become French at first, but am tired of waiting now. I think the pandemic has slowed everything down.”

Applying by declaration means that you are claiming something to which you are legally entitled and is generally shorter.

The process requires less paperwork and is given priority over other dossiers but timespans also vary around the country.

The Service Public website states that a receipt is given after the prefecture interview and the ministry has one year from then to make its decision.

Applicants in Paris report that they have become French five to seven months after applying. Meanwhile, a British applicant applying in Nice via her French brother was told the decision would take up to 18 months.

Another resident who applied by declaration in August 2020 via the same prefecture has been told she will not be French until at least the end of this year.

One person who volunteers to help people with immigration issues said Paris “has far greater resources and is better organized than smaller prefectures”.

“In the same way that a busy restaurant is more efficient than a slow one, processes are streamlined by necessity. They also limit the scope of background checks and forgo the police visit.

“Smaller prefectures, or ones that are not managed very well, are slow to implement changes and many don’t seem to have a motivation to serve the public.

“They are understaffed for the demand, and instead of allocating more resources they allow the queue to build.”

A great deal of time is lost in some areas. One applicant in Essonne had to wait three months to get an appointment to physically drop off her dossier.

Others require dossiers to be submitted by post, while 23 departments are accepting dossiers online as of last month.

It is hoped this will facilitate access to the service, limit visits to prefectures and reduce the processing time. Applicants can follow their dossier’s progress in an online account and respond to requests for information (40% of files received are judged incomplete).

While workload may be to blame for delays in some areas, the number of people acquiring nationality has been falling overall in recent years.

Moroccans and Tunisians top the numbers for people becoming French; around five times more than Britons. Even so at least 10 times more Britons have become French recently compared to before the 2016 EU referendum.

Driverless postal vehicles tested in Montpellier
3 December 2021
More from French news
More from Connexion
Get news, views and information from France
Join the newsletter
Subscribe to The Connexion