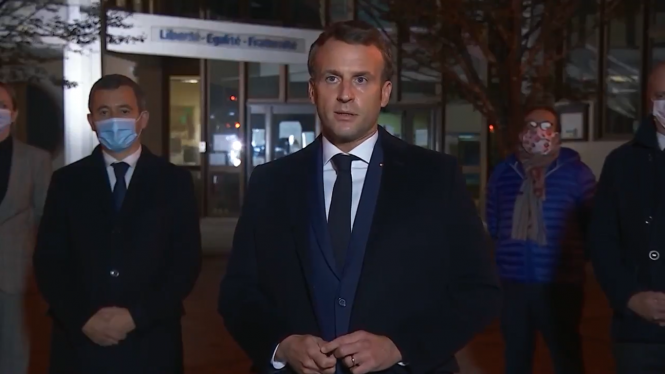 A history and geography teacher, who had shown his pupils caricatures of the prophet Muhammed, was beheaded near a secondary school on Friday, October 16, in a suburb of Paris.

Mr Macron was speaking from the scene of the attack in Conflans-Sainte-Honorine in the department of Yvelines, northwest of Paris.

The assailant was shot and killed by police at the scene.

It comes three weeks after a knife attack near to the former office of satirical magazine Charlie Hebdo.

The Charlie Hebdo office was attacked by Islamic extremists in 2015 after it published cartoons of Muhammad, a Muslim prophet who, according to the faith, should not be depicted in photos, drawings, sculptures etc. 12 people were killed in that attack.

The municipal police of Conflans Sainte-Honorine alerted the national police after discovering a decapitated person. The local police officers first arrived at the scene around 17:00 on Friday, France 3 Ile-de-France reports.

A man wielding a large knife reportedly attacked the teacher in the street before running off.

The police pursued him and confronted him in the nearby district Éragny. The man shouted "Allahu Akbar", or "God is Greatest", news agency Reuters reports.

A witness contacted by France 2 said: "We saw two police cars looking for something. So we told them, we made big gestures to them. I warned my mother to lock herself up at home. And then she called me back, she said, 'I hear gunshots, I hear gunshots.”

Nine people, including a minor, have been taken into police custody. Among them is the father of the assailant, who had complained about the teacher on social networks.

What do we know about the victim?

The victim is a 47-year-old history and geography teacher. In France, the two subjects are combined.

The president was referring to the fact that the teacher had taught a class one week prior on freedom of expression where he showed cartoons of Muhammad. He had asked his Muslim pupils to leave the room if they thought they would be offended, FranceInfo reports.

Some Muslim parents complained to the school about the teacher’s decision to show the cartoons.

France’s education minister, Jean-Michel Blanquer, Tweeted on Friday: “Tonight it is the Republic that is under attack with the despicable murder of one of its servants, a teacher. I think tonight of him, of his family. Our unity and our firmness are the only answers to the monstrosity of Islamist terrorism. We will face up to it.”

The hashtag #jesuisprof is trending on Twitter in France in honour of the victim.

What do we know about the attacker?

The suspect is an 18-year-old male, born in Moscow, Russia in 2002. He has Chechnyan origins, news agency AFP reports. He was unknown to French intelligence services.

The assailant's act was claimed on a Twitter account that has since been closed. On this account, a photo of the victim after the attack could be seen. The alleged perpetrator says he wanted to avenge Allah. The police are conducting investigations to authenticate this account, to determine if it belongs to the suspect or an accomplice.

What has the reaction in France been?

Mr Macron assured that the nation would stand together against “obscurantism” to “protect and defend” teachers.

Obscurantism refers to the practice or policy of deliberately making something vague and difficult to understand, especially in order to prevent people from finding out the truth.

"All of us will stand together. They won't get through. Obscurantism and the violence that accompanies it will not win. They will not divide us. This is what they are looking for and we must all stand together," Mr Macron said.

The magazine Charlie Hebdo released a statement on its Twitter page. It read: “Charlie Hebdo shares feelings of horror and revolt after a teacher in the exercise of his profession was murdered by a religious fanatic. We express our strongest support to his family, his loved ones and all the teachers.”

Snes-FSU, a secondary school union, published a statement that read: “This appalling assassination was committed against a teacher who was doing his job, so it was the heart of the school that was attacked: the missions of learning and liberation.”