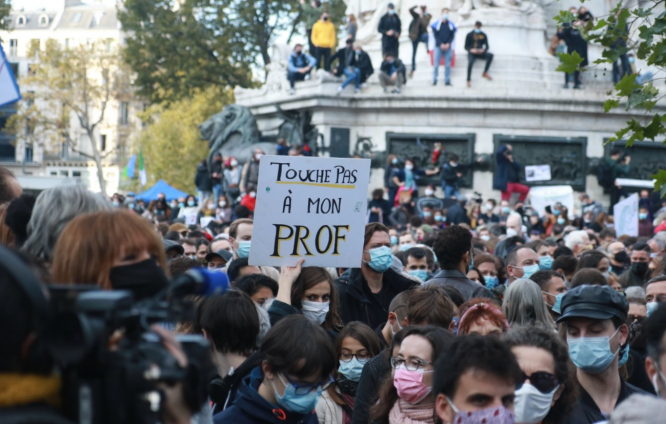 Thousands gather in Conflans-Sainte-Honorine, France, to honour murdered teacher Samuel Paty, as an hommage national is scheduled for this evening
By Hannah Thompson

A booklet of political and religious cartoons is to be published and distributed in lycées across France to defend the freedom of expression, as the country prepares to honour murdered teacher Samuel Paty.

The booklet was an initiative from administrative group Régions de France, which brings together presidents of regions across the country.

Speaking at the group congress this week (October 19), group president Renaud Muselier said: “We, the presidents of regions of France, are taking the initiative to prepare for publication a work bringing together the most notable religious and political caricatures that have appeared in the regional press, as well as those in the national press.

“We will ask a group of historians to explain the context of the right [to create] caricatures as part of the political history of our country.”

Mr Muselier confirmed that the Minister for National Education, Jean-Michel Blanquer, would also be involved with the booklet, “so that this initiative and work can be available to all lycée students in France”.

He said: “Through this move...we want to show our commitment to defend the values of the Republic, and the fundamental right of each of our citizens to live in peace and freedom.”

The congress then held one minute’s silence in honour of Mr Paty.

Mr Muselier condemned the killing of Mr Paty as “a despicable and cowardly assassination”.

Mr Paty was murdered near his school, collège Le Bois-d’Aulne, in Conflans-Sainte-Honorine in Yvelines, Île-de-France, at around 17:00 on October 16. He was beheaded by an Islamic extremist after showing pupils cartoons of the Prophet Muhammad as part of a class on free speech.

The murderer was later shot in a standoff with police.

The plans for the booklet come as thousands of people took to the streets to march in homage to the slain teacher yesterday (Tuesday October 20).

In Conflans-Sainte-Honorine, local gendarmerie estimated that 6,000 people gathered in front of the collège Le Bois-d’Aulne at around 18:30.

The crowd - which included local residents as well as many students who attend the collège and who knew and were taught by Mr Paty - observed a 10-minute silence in Mr Paty’s honour, before marching to the town’s Place de la Liberté.

Mayor Karl Olive said: “Today is the time of homage, of gathering together and of shock. Tomorrow, it will need to be a time of courage, because the public has had enough, and this cannot continue.”

On Friday 16th October 2020, in Conflans-Sainte-Honorine, France, Samuel Paty was murdered over a cartoon. Samuel was a 47-year-old History and Geography professor at the college of Bois d'Aulne in Yvelines who recently gave a course on ‘freedom of expression’ which

Mr Paty is to be honoured with an “hommage national” ceremony today at 19:30-20:30 tonight (October 21) in the courtyard of university La Sorbonne in Paris, in the presence of President Emmanuel Macron.

An hommage national is a type of public state funeral ceremony held in France, usually reserved for military figures deemed to have offered exceptional service to the nation. It can only be authorised by the President.

The memorial has been arranged with agreement from and close cooperation with Mr Paty’s family.

In choosing La Sorbonne for the event - in contrast to Les Invalides, which is the usual location for an hommage national - the family has opted for a symbolic, historic location that is an icon of French knowledge and culture, but also the site of intellectual discussion and debate.

Former President François Hollande has confirmed that he will be present at the ceremony. Representatives of the French Muslim faith council, le Conseil français du culte musulman, will also be there.

The number of people present will be limited to a maximum of 400, with social distancing and hygiene regulations in place, due to the Covid-19 crisis. The ceremony is to be televised on giant screens in front of the Sorbonne, to allow the public to follow the event from a distance.

Mr Paty’s coffin will be brought into the courtyard, carried by Republic guards. Two readings are expected to be read by students and teachers, including one that is the letter written by French writer Albert Camus to his teacher Louis Germain, the day that he received the Nobel Prize for Literature.

Mr Macron will then speak for 10-15 minutes. His words are expected to focus on Mr Paty’s life, and on the issues of secularism and free speech. He is also expected to offer support for teachers, and to remind them not to be afraid, and to not feel pressured into “censuring” themselves.

On the night of Mr Paty’s death, Mr Macron said that the teacher had been killed “because he was teaching, because he taught his pupils about freedom of expression, and the freedom to believe and not believe”.

Mr Macron’s wife, Brigitte Macron, will not be present at the ceremony, the Elysée has confirmed, as she is self-isolating due to being in contact with someone confirmed to have Covid-19.

Instead, she has written an open letter in honour of Mr Paty, which was published in newspaper Le Parisien yesterday.

The letter included: “Today, we are with you, we are all teachers. Being a teacher is to...develop critical thinking in pupils, to free them...you knew this Samuel, and even better, you lived it. You had the highest idea of what it means to be a teacher.

“Your family has told us, the President of the Republic and to me, of your high standards and extreme tolerance. Their dignity has blown us away.”

Paris killing: What we know about the attack