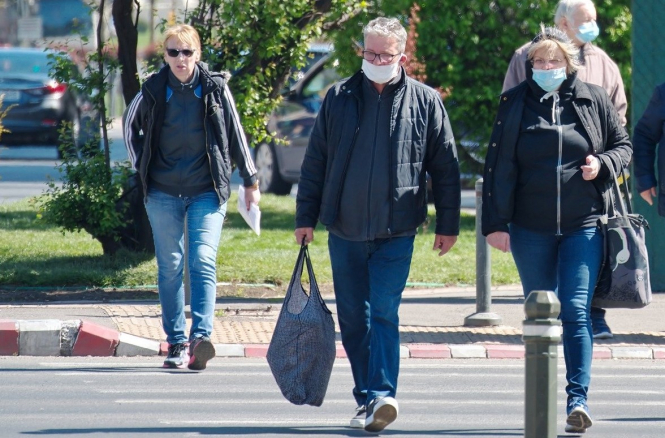 Mask-wearing will help to contain the virus, one study found, but other strong measures must be respected
By Liv Rowland

The studies by a group from the AP-HP Paris hospitals group and the French research body Inserm both state that it will require considerable discipline to keep the numbers of new cases under control, but even then a second wave is a serious risk, they claim.

The first study by AP-HP found that social distancing and mask-wearing would slow the epidemic but would not be enough to prevent intensive care units being overwhelmed by the end of July and a second lockdown being required unless it was also accompanied by ‘shielding’ of vulnerable people (eg. the elderly and those with chronic illnesses such as diabetes, severe high blood pressure, lung conditions and obesity).

It would therefore be necessary for most of those concerned to strictly limit their contacts with others and to stay at home as much as possible until the end of the year, the study said.

Even in that scenario AP-HP found there would be some 33,500 extra deaths between May and December, as opposed to 87,100 if this measure was not respected.

However if respected, then an adequate number of intensive care beds would be maintained so as to prevent a second lockdown being required, the study said.

After this there would then be sufficient collective immunity in the French population, it found.

The study assumed a progressive reopening of schools and a return to work by the majority as well as the quarantining of infected people and tracing their contacts.

It took as its model the circulation of the virus among a fictional population of 500,000 and was done before the exact details of the first deconfinement phase were clear.

However similar advice has now been put out to so-called ‘vulnerable’ groups, although there is no obligation to comply with it.

The second study by Inserm looked at the Ile-de-France – currently classed as a red zone for its Covid-19 risk – in connection with deconfinement including reopening of schools.

Even though young children are considered less likely than adults to transmit the coronavirus, there is a strong risk that this will result in an increase in cases, the study found.

It found that the epidemic could only be controlled if around half the population stayed mostly at home, either via homeworking or because their business has not reopened yet.

Homeworking would have to remain the norm and only half of businesses should reopen. Elderly people would have to continue to strictly limit their contacts with others.

Another condition would be that the new system of testing and of tracing recent contacts of infected people should detect at least half of new infections, the study found. These people should then be isolated.

Research leader Vittoria Colizza told Le Monde: “If only 25% are identified we will have to face to a second wave more intense than the first one, starting at the end of June, with the capacity of intensive care beds overwhelmed until August.”

A “massive” mobilisation of people will be needed to help with the tracing, she added.

The government’s current deconfinement plan includes the use of ‘brigades’ around the country dedicated to this.

The study also found that it was important that secondary schools should not reopen in May in Ile-de-France and if they reopen in June it should only be very progressively.

As a ‘red’ zone, known to be strongly impacted by the virus, it is not now expected that any secondary schools will open in Ile-de-France this month.

A research director at French scientific research body CNRS, geographer Eric Daudé told Huffington Post that both models used “have their drawbacks” and should not be seen as infallible, nonetheless since they arrived at similar "pessimistic” conclusions they are an “important aid to decision-making and reflection that mean we must take great care”.

It was also notable that both came to such conclusions despite making some ‘prudent’ assumptions as to how the deconfinement would work, he said.

Among these was an assumption that people would only visit friends about once a week, he said. This was likely to turn out to be an underestimate, and it was also doubtful if people would respect social distancing during an apéro with friends, said Mr Daudé.

On the other hand he said in some respects the studies may have underestimated some of the realities of the deconfinement period, for example the AP-HP study assumed there would be a more general reopening of schools than is the case, while the Inserm study did not account for widespread wearing of masks.

Another expert advising great caution in recent days is Prof Antoine Flahault, an infectious diseases expert at the University of Geneva, who told BFM TV that while the warm summer days should help contain the virus there is still much we do not know about this coronavirus it was preferable to prepare for a second wave.

However Dr Karine Lacombe, head of the infectious diseases service at Paris’s Hôpital Saint-Antoine told the same channel that while there was a strong likelihood of resurgences of the disease, it would probably be limited to well-defined ‘clusters’, which could be treated.