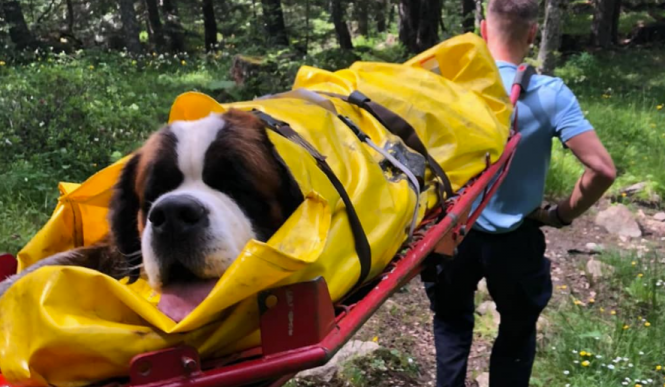 Saint-Bernard mountain dogs are known for their rescue skills, but one needed rescuing itself last week after the 75-kilo animal suffered a 10m fall.

The dog had been walking with his owner, but fell from a very steep path. Having injured his paws, the animal could not get up or continue walking.

His owner called the PGHM, which came to the dog’s aid and evacuated him from the mountain on a stretcher. The animal was then given care by a vet.

Luckily, the dog’s injuries were only superficial and he began to recover quickly.

O’neill’s owner later wrote on the PGHM Facebook page: “My O’neill is strong; nothing broken, no internal injuries. He is starting to walk again, his appetite has returned. Just a few injuries, bruises, sprains. We are watching over him.

“Thanks to this star who shone on Sunday, and thanks again to the Peloton de la Gendarmerie de Haute Montagne de l'Ariège.”

The PGHM took the opportunity to remind dog owners to take great care in mountain areas and on rocky trails and said that dogs are often banned from some nature reserves and national parks, and must always be kept on a lead near other animals.

Chief PGHM officer Jérôme Bourrières said: “This incident must remain an exception. Usually, we don’t do animal rescues. In this case, we intervened to help the owner, so that he wouldn’t put himself in danger to go and rescue his dog.”

Animal mountain rescue charity in France is a world first
Can I walk my dog on hunting land in France?
Covid sniffer dogs could work summer events in France

3 days ago
4
Minimum wage in France is rising – what is the average salary now?