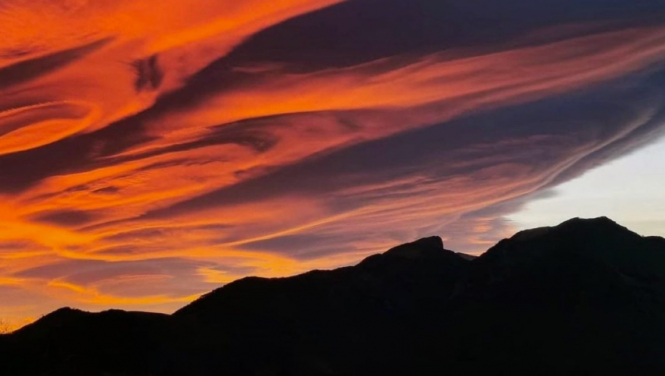 Skies above France are to turn orange today for the third time in a month, as sand from the Sahara blows over the south, causing a drop in air quality - ahead of a cold snap arriving tomorrow.

Tristan Amm, forecaster at Météo France, told news service France 3: “We have depressions that cruise towards southern Europe, which generate wind that picks up sand from the Sahara.

“These desert particles get to high altitudes, and given that atmospheric currents are very powerful right now, the sand is transported hundreds of kilometres, and comes into our sky.”

The phenomenon is a regular annual occurrence but has been especially noticeable this year.

The first episode took place on February 6, followed by the weekend of February 21. Even more astonishing was that residue of césium-137, from French nuclear bomb trials, was found in the particles.

These were remnants of French nuclear trials that took place in the Algerian Sahara in the 1960s.

These were not considered to be dangerous.

Which areas are most affected?

The south and southwest of France, including in Occitanie and over the Pyrenees.

The phenomenon can cause the sky to take on an ochre tinge, and has also appeared to turn the snow in the Pyrenees slightly orange.

Tweets from earlier in the month show the effect the sand can have.

What are the effects?

Air quality could be reduced.

Vincent Guidard, researcher at weather research unit le centre national de recherche météorologique de Toulouse, said: “There could be an impact on the air quality. The amount of particles being transported will be significant.

“The total amount could rise to several grams of sand per m2 in some areas, whereas in general we usually count in milligrams.”

Air quality monitoring network Atmo has also confirmed this, saying that some departments in south Occitanie could see reduced air quality due to desert particles.

How long will it last?

Not too long this time - a couple of days at the most.

High pressure from Spain, and a wind from the Languedoc and the Midi-Pyrénées will continue until Wednesday, bringing springlike sun and temperatures from 14-18C nationwide - and as high as 20C in the southwest. This is a high not normally seen until April.

But, a cold snap is forecast for France from Thursday 4.

A depression will come from Scandinavia and Scotland, causing clouds to gather, and some rain in the north. This will join with cold weather from Brittany, to descend across the entire country into the weekend.

Temperatures will drop by 4-8C, with maximums hovering around 6-9C in the north, and 10-12C in the south.

Rain and wind to dust France with Saharan desert sand

French scientists call for samples of Sahara sand in snow