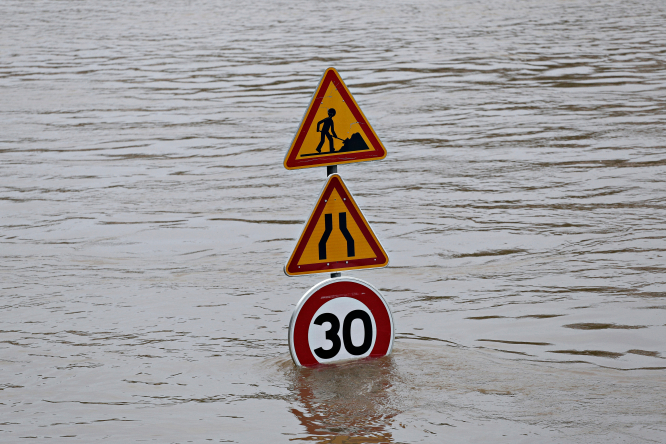 Almost two metres of water were reported in some streets immediately after the record rainfall, with some residents and drivers requiring evacuation overnight Pic: Alexandros Michailidis / Shutterstock

Residents were evacuated and car drivers rescued after the town of Agen, Lot-et-Garonne, experienced record flash flooding last night, after two months worth of rain fell in under two hours.

A weather station in the town recorded 129.6mm of rain. Météo France said it was an “absolute 24-hour record”. More than 80mm fell in just one hour, itself a record dating back to 1941.

Storms passed over at around 23:00, with storm observatory Keraunos saying “more than 3,000 lightning bolts were detected in Lot-et-Garonne on Wednesday night (September 8)”.

More than 300 firefighters and emergency services personnel were deployed overnight, with 130 call-outs after 23:20. Around 15-20 households had to be rescued, either from their cars, or helped upstairs from the lower floors of their houses, said Frédéric Tournay, commander of the SDIS 47.

At around 23:00, town centre roads were covered by water and drivers were forced to abandon their cars as road traffic stopped.

No injuries or deaths have been reported.

The town’s mairie said there were up to two metres of rain in some streets and that firefighters were continuing to assist. It added that the mairie would help anyone in need of temporary rehoming due to the floods.

Clémence Brandolin-Robert, first deputy to the mayor, told BMFTV: “We have a lot of cellars and garages that are completely flooded. There was just too much rain.”

One resident, Yves, whose garage flooded with his car inside, said: “I’ve lost everything, I can’t even see my car’s engine. I’ve never seen flooding like this. I’ve had 10cm before, but this is the first time I’ve seen a metre.”

Another resident, Mathieu, said: “It happened so quickly. In 10 minutes, everything was flooded.”

A third resident, Vincent Inigo, said: “I went down to the cellar earlier to get a suitcase. I tried to go back down half an hour later, and there was 1.50m of water there. It was a torrent.”

Schools are, however, expected to open as normal today (September 9), as no school buildings were flooded.

Around 200-300 households in the neighbouring department of Dordogne are also without power this morning, after there was some flooding and some trees were knocked over. Electrical company Enedis is present at the site, working to re-establish the connection.

Météo France has now lifted most of its orange alerts across the country, with the exception of four departments in the southwest (Gers, Tarn-et-Garonne, Haute-Garonne, and Ariège). Orange alerts were previously in place in 32 departments due to the risk of storms and flooding.

More rain and storms are expected around midday in the south-west and north-east of France.

32 departments in southwest and central France on orange storm alert