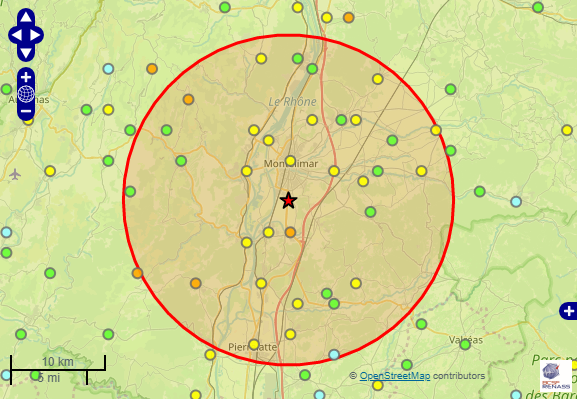 The epicentre of the earthquake in the south of France on November 11, 2019, was just outside Montélimar
By

A strong earthquake in the south of France damaged churches and houses, and injured four people, one of them critically.

The epicentre of the tremor, which had a magnitude of 5.4 and struck at 11.51am on Monday, November 11, was just 2km below the surface near Montélimar, in the Drôme, experts at the réseau national de surveillance sismique said. The ground shook for about 10 seconds, according to reports.

In Montélimar, a building worker was critically injured falling from scaffolding.

The nearby Ardèche town of Teil has been particularly affected. The bell towers of two churches are in danger of collapsing following the quake, while some 200 houses were also "severely affected" and have been evacuated, according to mayor Olivier Pévérelli. Residents have been asked not to return home until authorities have checked the buildings for safety. Three gymnasiums that have been opened to take in those affected.

Emergency services issued a plea for members of the public not to 'unnecessarily saturate the emergency lines' following the incident, so that officials could deal with genuine emergencies. The Vaucluse fire brigade received "about 50 calls, mainly from municipalities in the north of the department, including Bollène and Valréas", a spokesman told AFP.

Officials said that the Tricastin nuclear power plant, about 30 kilometres from Montélimar, was not damaged in the quake. Seveso plants in the vicinity have also reported no damage.

While tremors are relatively common in the region, they are rarely as strong as this one.

It was felt across a large part of the Rhône valley - and even as far away as in Grenoble and Montpellier, according to claims made on social media.