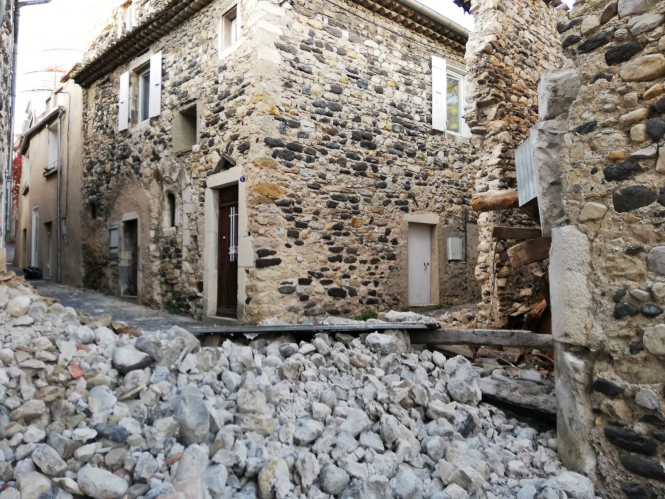 Many old buildings were severely affected, with the commune of Teil reporting the most damage
By Connexion journalist

The commune of Teil, in the Ardèche department (Auvergne-Rhône-Alpes) has been especially affected, with around 250 old buildings severely damaged, as well as two churches whose spires appear to be at risk, and one church in which part of the ceiling has collapsed.

Images from the commune show houses with their walls fallen in, windows and shutters crumbled, and rubble on the ground.

Four people were reported injured, including one person seriously. Hundreds of firefighters were called in to help ensure that everyone had left the dangerous buildings.

Inhabitants spent the night in three local gymnasiums that have been opened for those who cannot return home. Many have been told they will not be able to return until emergency services have ensured the safety of their property.

Production at three nearby nuclear reactors at the power stations of Cruas-Meysse and Tricastin has been suspended as a precaution, but no damage has yet been reported on-site, according to Électricité de France (EDF).

Olivier Peverelli, mayor of Teil, said: “We can’t get to the top floor of the Mairie; the ceilings have fallen in. The roofs of the churches are at risk of collapsing...we have not evaluated the damage, but it is enormous.”

One elderly resident said: “These are buildings that have been here for several generations. We’ve never had an earthquake. I would never have imagined this.”

Another resident, Pierre Beaumont, said: “The whole wall moved. It has all broken, everything is on the floor.”

Some children who were staying in gymnasiums reported serious damage to their homes to news source FranceInfo.

One said: “Two ceilings fell in; my father’s bedroom cracked. Outside the building, some rocks fell down. It’s unliveable.”

Another added: “At my house, the chimney and the bathroom window fell in, the furniture moved, there are cracks in the walls...we don’t know when we’ll be able to go back, so we’re staying here. I am scared that [the earthquake] will start again. It was a bit scary, really.”

President of the local Red Cross (la Croix-Rouge of Vals and Aubenas), Coraline Mialon, said: “The [evacuated] children have been playing together all night, but sometimes, you have to keep an eye out for one who is all alone in the corner; a child finding it difficult...we were able to see that they were quite traumatised.”