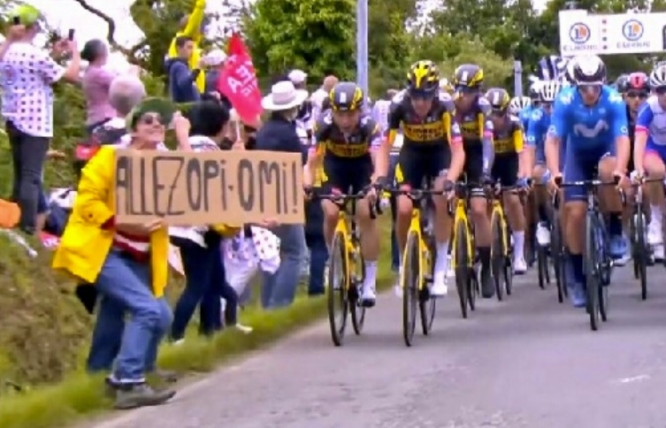 The as-yet-unidentified woman who held the sign too close to the peloton fled the scene after the crash Pic: Gendarmerie du Finistère / Facebook

Authorities are working to find the identity of a Tour de France spectator who caused a major crash in the peloton during the Tour de France, with an inquiry into ‘involuntary injury’ now opened.

The crash happened on Saturday, June 26 during the first stage at Landerneau (Finistère, Brittany), 45 kilometres away from the end.

A woman in the crowd held up a placard reading ‘Allez Opi Omi’ (Opi and Omi means ‘Gran and Grandad’ in German), excitedly looking at the camera, not looking at the riders.

But she held the sign too far into the road, and as the peloton approached, the sign blocked the path of a German rider, Tony Martin, who fell as a result.

This caused a ‘domino effect’ and caused more than 50 riders to fall and crash. The woman who had held the sign left the scene.

I am in complete awe of this person singlehandedly ruining the #TourDeFrance. Pure chaos! pic.twitter.com/wfgsfnfZkB

Another German rider, Jasha Sütterlin, has had to abandon the race as a result of the crash. No other riders or spectators have been reported as injured.

The gendarmerie of Finistère is now calling for witnesses and has opened an inquiry. The Tour de France organisers have themselves lodged an official complaint and said that the woman may be sued.

Witnesses have confirmed that she was at the Tour alone. She was wearing a bright yellow jacket, a striped T-shirt, and sunglasses.

Anyone with any information is invited to call the gendarmerie of Finistère on 02 98 55 80 66.

‘The only stars are the riders’

Tour de France director Christian Prudhomme said: “It’s unacceptable. Those who deserve to be on TV are rightfully the champions, not this kind of individual. If people want to look at themselves, there are mirrors for that.”

Pierre-Yves Thouault, deputy director of the Tour de France, said: “We are making a complaint against this woman, who behaved very badly. Let’s make sure that the performance we are being shown is not ruined by unacceptable behaviour by an incredibly small minority of spectators.

“You can’t just do whatever you want. The only stars of the race are the riders.”

Mr Thouault reminded people that spectators must follow the strict rules, including staying well within the borders of the roadside, not trying to cross the road, and not taking ‘selfies’.

Gendarme, Lieutenant-colonel Joël Scherer, who is handling the case for the AMO, said: “The main challenge of the Tour is still road safety, which was clear yesterday. But I can confirm that no members of the public were injured.”

The crash happened in an area of the route not normally considered dangerous, meaning that there were no emergency services stationed at the roundabouts or crossings. This delayed emergency service access to the scene.

The sheer number of bikes involved also made it difficult for services to access and help in the aftermath.

If caught, the woman risks being charged with “unintentional injury with incapacity not exceeding three months by the non-deliberate violation of an obligation of safety or prudence”, which is punished with a fine of €1,500.

Rider Mr Sütterlin, who has had to abandon the race, is also set to lodge a formal complaint and is pushing for the woman to receive more than a fine for her actions.

The stage was eventually won by French rider Julian Alaphilippe. The Tour is continuing and is set to finish on the Avenue des Champs-Elysées in Paris on July 18.

15 hours ago
5
France reopens to UK tourists: Rules for adults and children