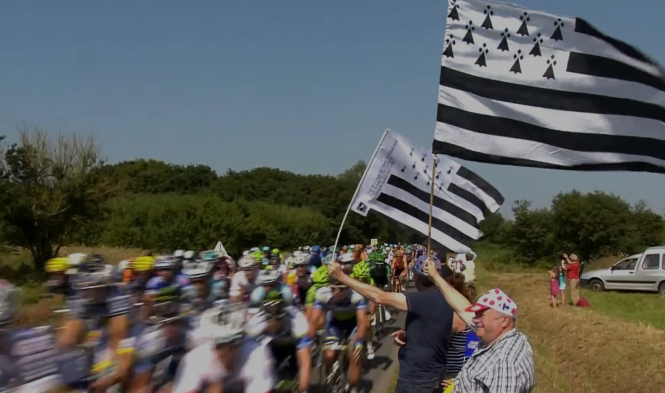 The Tour 2021 will now begin in Brest, Brittany, with the original start city of Copenhagen in Denmark pushed to 2022
By Connexion journalist

Next year’s event has also been moved forward by a week - it was originally due to start on July 2, but will now begin on June 26, to ensure that it arrives in Paris by July 18. This will mean it avoids conflicting with cycling events at the postponed Olympic Games, which are now set to take place in Tokyo, Japan, on July 25.

Copenhagen will still host the Tour Grand Départ, but this will now happen one year later than planned, in 2022.

Brittany will not only welcome the start of the race, but will also host the first four stages of the 2021 route.

The changes have been made partly due to scheduling changes caused by the Covid-19 crisis, the postponed Olympics, and Denmark’s role as host of several matches of the UEFA Euro 2020 football tournament, which has been postponed to June-July 2021.

The final decision was made after several weeks of discussion with organisers.

Mayor of Copenhagen, Frank Jensen, said: “I am happy that we have succeeded in guaranteeing a Danish departure for the Tour in 2022. We will be delighted to have the Tour de France in Denmark the year after [even though] we must now, alas, wait a little longer.”

“The Danish people can look forward to an even bigger event in 2022, when the start of the Tour will not be sandwiched between the Euros and the Olympic Games, and when we will have - I hope - more distance from the risk of coronavirus.”

Brittany and cycling: A history

Brest and the Brittany region have welcomed the news.

At a press conference, president of the Brittany region, Loïg Chesnais-Girard, said: “This is an important moment for Brittany, for Bretons, and for the Tour. We are honoured and proud to have been able to respond when the Tour asked, not to fill a hole, but to fix a calendar change due to changes in Euro 2020.

“Brittany and cycling have a long history.”

And Christian Prudhomme, head of the Tour, said: “Brittany is not a plan B, it's a plan A, one year ahead of schedule."

This will be the seventh time that Brittany has hosted the start of the Tour de France, it is the only region in France except Paris to have welcomed the event more than twice.

The Tour also passed through Brittany in 2018, for five days. The riding route passed through Lorient, Quimper and Brest, ending at the famous Mûr-de-Bretagne coastline.

Since 1906, the region has held 170 stages of the race, and 33 Breton towns and cities have hosted at least one stage.

Four Bretons have won the Tour, including Lucien Petit-Breton and Bernard Hinault.

The Tour has been postponed and changed around this year and next due to Covid-19 (Photo: Le Tour image gallery / Best of 2019 / letour.fr / Pauline Ballet / Etape 11 between Albi and Toulouse)

This year’s Tour de France - which will begin in Nice on August 29 - has not been without its own scheduling hiccups.

Initially there were fears that it could be cancelled completely, but it was eventually postponed from its original start date of July 27 to August 29. The event - the 107th edition of the Tour - will last until September 20, ending as usual on the Champs-Elysées in Paris.

Read more: Will the Tour de France 2020 be going ahead in August?

Despite ongoing fears about the spread of Covid-19, there has been no suggestion that the Tour will not go ahead, although organisers have put in place extra precautions in a bid to keep riders, organisers, the press, and the public safe.

These include an initial plan, including physical distancing and measures such as wearing masks and using sanitiser gel; while a second, stricter plan will include even more safety measures.

Both plans will be trialled during the race, and may be deployed depending on the Covid-19 situation as the race begins.

Further measures may include limiting fans’ and journalists’ access to certain areas, reducing the number of support vehicles, and limiting the number of people allowed to enter certain popular mountain passes or race areas.

Race head Mr Prudhomme said: “The authorities asked us from the beginning to work on several scenarios and it [the second wave] is part of the considerations so we are therefore prepared for it.”

Mr Prudhomme has also reiterated that spectators along the route should wear masks at all times.

“And not just where it's mandatory - at the start and finish - where we'll make sure it's respected.”

He added: “This will not be the year to ask for autographs and selfies. The cyclists will say hello from a distance.”

Another effect of the coronavirus pandemic is that this year’s Étape du Tour was cancelled.

The "Étape" is an event that allows amateur cyclists to ride the same route as one stage of the professional race. It is usually held on a rest day in early July, but had been rescheduled to take place on September 6 this year.

However, race organisers announced in late July that this year’s event would not go ahead due to issues caused by the pandemic.