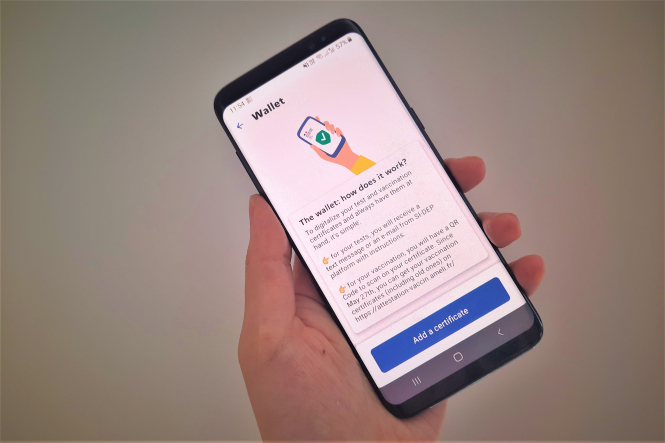 People with Covid vaccination certificates issued in England can upload them into France’s Covid app, but they are not yet compatible with France’s health pass verification technology Pic: The Connexion

UK NHS vaccination certificates are not yet compatible with France’s health pass scanning tool which will be used in restaurants, bars and many other venues in France from next week, the British Embassy in Paris has confirmed to The Connexion.
This is despite the fact the certificates can be uploaded to the phone application TousAntiCovid in order to facilitate travel into France and other EU countries.

Covid vaccination certificates issued in the UK can be used as proof of vaccination to enter France. Passengers can present them on paper or through the TousAntiCovid app, which will be looked at by travel authorities rather than scanned.

The issue is, once in France, they cannot be scanned by staff at venues using France’s verification tool TousAntiCovid Verif.

It means that when staff at places subject to health pass rules try to scan the QR code, it will not work. British customers may then be denied entry, as they do not have a valid health pass.

Staff at these venues may choose to read the information on the certificate instead of scanning the QR code and therefore allow the British customer entry, but this is at the discretion of the staff and the venue’s management.

A spokesperson at the British Embassy in Paris told The Connexion today (August 4) that work was ongoing to make the NHS certificates compatible with France’s scanning tool.

The exact specifications of this rule depends on a judgement from France’s Conseil constitutionnel, to be announced tomorrow (August 5).

The health pass, which is proof of vaccination, proof of a negative Covid test taken within the past 48 hours, or proof of having been positive with Covid 11 days to six months before, is already required to enter museums, theatres, cinemas, public swimming pools and some other venues that can host over 50 people.

It has been possible since July for UK visitors to France to scan the QR codes on their NHS vaccination certificates issued in England to France’s TousAntiCovid app.

No timeframe was given by the British Embassy in Paris as to when the British QR codes will be readable.

However, France has not issued an official statement on whether venues, including restaurants, cafes, bars, etc, can accept paper-based foreign vaccination certificates as part of the health pass.

France has also not supplied official information on whether US vaccination certificates will be accepted as part of its health pass requirements, a spokesperson for the US Embassy in France told The Connexion yesterday (August 4).