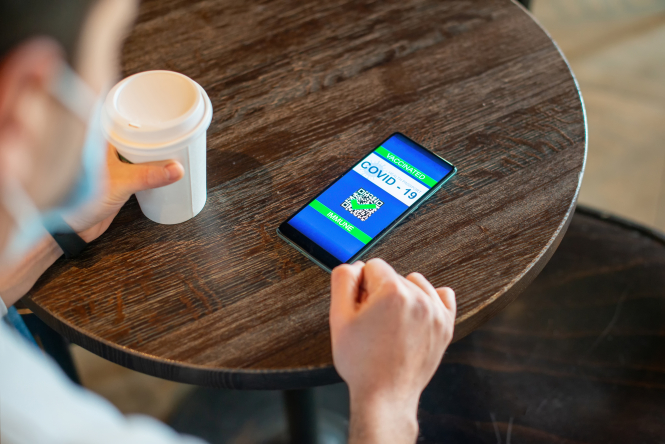 It is not yet known if restaurants, cafes and bars in France will accept US Covid vaccination cards as part of extended health pass measures, set to come into effect August 9 Pic: Pazargic Liviu / Shutterstock

France has not supplied official information on whether US vaccination certificates will be accepted as part of its health pass requirements for entering cultural and leisure places, as well as restaurants, cafes and bars from August 9, a spokesperson for the US Embassy in France told The Connexion today (August 3).

It is now a requirement for all over 18s to show a health pass to enter museums, cinemas, public pools and various other culture and leisure places with the capacity to receive 50 people or more.

A health pass is proof of vaccination, proof of a negative Covid test taken within the past 48 hours, or proof of having been positive with Covid 11 days to six months before.

The Eiffel Tower, the Palace of Versailles, and the Musée d'Orsay all confirmed to The Connexion today that they will accept US vaccination cards - which vary on format from state to state - as proof of vaccination. Visitors may also be asked to provide their identification.

From August 9, subject to approval from France’s Conseil constitutionnel, all adults will also have to show a health pass in order to go to restaurants, cafes and bars.

It is yet known if these places will or are legally allowed to accept US vaccination certificates as part of this rule.

There have been reports of people converting US vaccination certificates to EU-approved ones by asking French health professionals to generate the certificates.

The US embassy in France states:

“As of July 21, the French government has not provided official information on obtaining a health pass for people vaccinated outside the European Union.

“While some people have been able to have their information entered into the French system by a French doctor or pharmacist, others have been told this is not possible.

“At this time, the Embassy is not aware of the extent to which it is still possible to have the US information entered into the French system.”

The Connexion has contacted France’s foreign affairs and tourism ministry to ask if US vaccination certificates can be used as part of the health pass measures, and is awaiting reply.

The EU Commission has previously told The Connexion that it was in talks with the US about making its vaccination certificates compatible with an EU wide scheme known as Digital Covid Certificates. A spokesperson said that the UK and EU certificates were easier to integrate than the US ones because they shared a similar architecture. US vaccine cards are paper-based, whereas France’s health pass system is based on QR codes.

The Connexion has contacted the EU Commission to ask for an update and is awaiting reply.

US tourists to France who are vaccinated but want to have a document that is officially part of France’s health pass system can take a Covid-19 test in France.

France has set up a system to allow UK visitors to France to scan QR codes from their NHS vaccination certificates into France’s TousAntiCovid app. This will then function with France’s health pass scheme.

France has also set up a system to allow French nationals vaccinated abroad with EU-approved vaccines to convert their vaccination certificates into ones compatible with France’s health pass and the EU’s Digital Covid Certificate scheme.

Over four million US tourists travelled to France each year before the Covid-19 pandemic, making it France’s 9th biggest tourist market and biggest non-European market.

Many hotels in Paris are choosing to remain closed in August due to the lack of US [and Asian] tourists, Franceinfo has reported.

The owner of the Hôtel Les Bulles de Paris, said her clients had expressed concerns over France’s health pass system.

“The American health pass doesn’t work in some places in France. That's why we're wondering about August: 'Will the tourists be able to come and do the activities they want to do or not?’” She said. She has decided to keep her hotel open for August.

The owner of the hotel France Albion in Paris, has decided to close the doors in August as she does not expect the usual economic boost from US tourists.

“No one understands the organisation of the health pass. And when we do not know what to do, well, we don’t do it,” Fabienne Ardouin, director of the hotel, said.

She said that in August most customers are from the US or Asia. However, this summer she has only counted 10% of US customers and no Asian customers at all.

22 hours ago
3
Has reducing the French speed limit to 80km/h saved lives?