Investigation into cause of Var wildfire begins as blaze slows 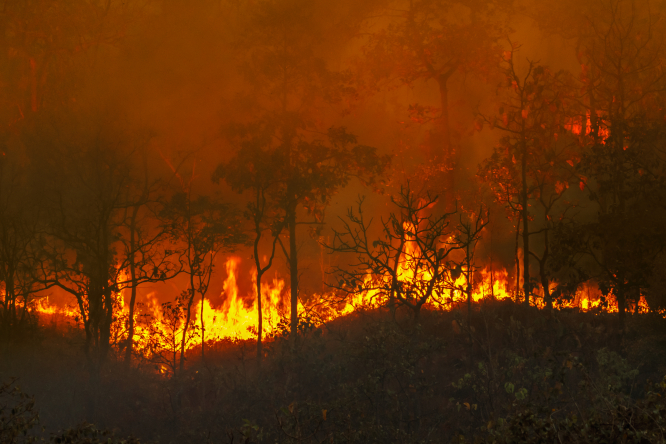 Investigations have begun into the cause of the Var forest fire which has now travelled over 7,100 hectares Pic: Toa55 / Shutterstock

The spread of the forest fire which has raged across 7,100 hectares in the backcountry near Saint-Tropez is now slowing and expert teams are beginning the painstaking work of investigating the cause of the flames.

The blaze began near a rest area (the Aire de Sigues) on the A57 motorway near Gonfaron in the Var at around 17:45 on Monday, August 16, before advancing across the Massif des Maures towards the village of Cogolin.

The first body found belonged to a man believed to be a bed-and-breakfast owner, and the second is thought to belong to 32-year-old Virginie Spiwack, who is known to have been staying in the area from Île-de-France for a few days' holiday

Ms Spiwak’s’s friends and family had not heard from her since late on Monday night, when she had called them in desperation, saying that she was surrounded by flames. She was reported missing on Tuesday, with her loved ones appealing for information regarding her whereabouts on social media.

Reporting surrounding Ms Spiwack has been uncertain, with some reports yesterday suggesting her body had not been found in the burnt out remains of the gîte she was thought to be staying in.

The public prosecutor in Draguignan has now stated it is “very plausible” that the second body found is hers.

As the fire continues to burn across the Massif des Maures, an investigation into the cause of the blaze  –  which is thought to be of human origin  –  has begun.

The investigation is being led by an interdisciplinary group uniting firefighters on the ground, gendarmes and forestry experts.

Aerial pictures taken from the emergency services’ firefighting planes will – taking into account the wind direction and the terrain – help to track back through the fire’s progression.

Investigators will determine whether there was a known site for wild camping close to the place where the fire began, somewhere which may have been at the origin of the flames.

They will also use CCTV footage of the nearby motorway rest area to try and identify the act  – a still burning cigarette butt thrown from a car window perhaps  – that may have set the disaster in motion.

When the fire has been extinguished completely, teams will enlist the help of sniffer dogs to carry out a thorough search of the burned area, looking for the remains of a fire-starting substance.

Although the fire is likely to have destroyed such clues, if anything is found it will be sent to forensic laboratories in the hope that they may still carry traces of DNA.

Another fire in Hérault

Over the three days that the Var fire has been burning, hundreds of firefighters have also been battling blazes in the southern departments of Vaucluse, Aude and Hérault.

The latter moved over 200 hectares of scrubland outside Sète near Montpellier in less than two hours.

This saw the mobilisation of 200 firefighters and a firefighting plane, although no one had to be evacuated.

This was the largest of several fires which began in Hérault on Wednesday, with another moving over approximately 50 hectares to the west of Béziers.