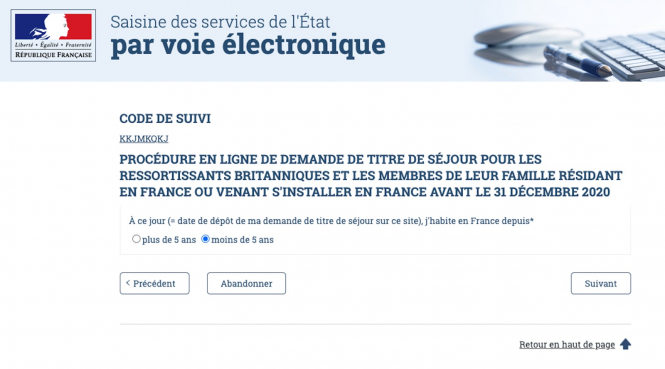 'It is unreasonable that people who have done what they should and applied should face loss of rights on October 1' says Rift’s Justine Wallington Pic: Screenshot from: contacts-demarches.interieur.gouv.fr

Update: This article is from the October print edition of The Connexion newspaper which went to press at 15:00 on September 27. The Journal Officiel announced an extension of three months for the card deadline on September 28. The new deadline is January 1, 2022 (read more about this here). We have asked the Interior Ministry how prefectures wil be updated and are waiting for a reply.

Thousands of Britons living in France face legal worries – with some unable to take up job offers – as delays hold up around 10,000 Withdrawal Agreement (WA) residency cards

UK nationals living in France by the end of 2020, and thus relying on the Brexit WA deal to secure their right to stay, are obliged under French law to have a card by October 1.

A decree says their rights to come and go at the border, to work, and to access benefits are all secure without a card until then.

A report by the joint UK/EU committee on citizens’ rights said that on September 6 there were 10,800 applications still in the system – in many cases despite early submission.

Among those waiting are some who have been called to a prefecture appointment to give fingerprints and a photograph but others have not.

A 26-year-old French software tester said her partner applied to Bordeaux in February but is still waiting, despite attending an appointment in March, and is now unable to take up a job offer.

“It’s urgent, as she has an IT job offer for October 4, but without the card she can’t start. She will be, in effect, an illegal immigrant. It’s very stressful for us both,” she said. A reader from Manche, who applied in October last year but has not yet had an appointment, said: “I have been offered a job in a local company but at the moment I can only freelance. I cannot even do a training course without proof of residency rights.”

Another is waiting after having an appointment at Bordeaux five months ago. “My job depends on my having a card on October 1,” she said.

There are also concerns about how those affected will prove residency when re-entering France after travel or while doing frontier work.

Campaigners believe a last-minute new decree to extend the deadline might come but this has not been confirmed by the Interior Ministry.

Several prefectures have told Britons in emails of plans to extend to January 1 and Pôle Emploi says it will not require those signed up to it as jobseekers to show a card until then, but there is no new official legal rule confirming an extension and it does not help those offered jobs.

Email attestations de dépôt sent automatically to people on application say WA rights remain until the prefecture has processed the dossier but the legal force of this is again unclear.

Half of EU states do not require Britons to apply apply for an obligatory card. Among others, deadlines vary to the end of 2021 but no other country has such a large backlog – nor so many Britons.

Maternity nurse Sue King, 66, from the Alpes-Maritimes, said she has been refused a work permit by Monaco as the authorities said she would need a card by September 30 – the day of her prefecture appointment.

Retired nurse Sue Joyce, 63, from Normandy, who applied in November 2020, said: “We’re planning to sell up and rent and will need to prove our rights.”

The problem was exacerbated when France announced a three-month additional application period after its official June 30 deadline. It did not ask for ‘reasons for being late’ (as it could have, under the WA).

A survey by the Rift campaign group in August and September found that of 2,917 who had applied for cards only a quarter had one, and of those waiting, half had no appointment date.

Rift’s Justine Wallington, a lawyer, said the problem will be explaining the situation to any authorities concerned. She said authorities are used to the récépissé handed to non-EU applicants in person by prefectures when they apply for a carte de séjour but will not be familiar with Britons’ email print-outs.

“We fear issues with Caf (family benefits), employers, border control, banks (for loans), Cpam, education, if you are checked by a gendarme, or driving licence exchange.

“It’s unreasonable that people who have done what they should and applied should face loss of rights on October 1.”

Rift Facebook administrator Claire Phillips said: “October 1 is really the deadline the government should have set itself to issue cards but it shouldn’t have said the individuals had to have their card by then. Many members who applied over three months ago don’t have cards, so even if they extend by another three months, we may face the same issue later.”

Christopher Chantrey, of the British Community Committee of France, noted that it is still not known what people should do over lost or stolen cards.

Kathryn Dobson, of France Rights (BiE), said that if the deadline is extended all relevant parties must be briefed.

The group understands a computer glitch has caused some older applications to be dealt with later than more recent ones.

Honorary avocat and retired solicitor Gerard Barron, from Boulogne-sur-Mer, said it is highly unlikely any action for illegal residency – issued by the same prefecture responsible for issuing the card – will be taken against someone waiting. It is unclear if France will continue to accept late applications from October, or how they would be made if the website closes.

The WA and French decree say late applications can be made in a ‘reasonable’ time with valid reasons but, technically, any since July were already late.

A British Embassy spokeswoman said to ensure you have your attestation de dépôt. “It is the prefecture’s responsibility to process your file and discuss timings with the ministry.”

Issues with bodies can be reported to the embassy or to the ministry (contact-demandeenligne-brexit-dgef@interieur.gouv.fr). UK-funded bodies helping with applications can still be contacted for help until October 15.

What does law say if you do not have a card?

The French decree says WA Britons need a card by October 1, but there are other factors which may offer help to those who find themselves without a card at that date.

People who applied on the WA card website are told in an automatic receipt email that their rights are retained until the prefecture has processed the dossier. This in itself has no legal force, says French avocat and British barrister Duncan Fairgrieve, but could help to explain the situation to employers or official bodies.

Also, the UK/EU WA treaty does state at article 18 (3) that Britons’ rights under the deal (eg. to live and work in France) are retained pending a final decision on granting of cards by authorities (eg. prefectures) or any legal appeal. The only exception to this is where an application was ‘fraudulent or abusive’. This is also stated at article 27 of the French decree.

Mr Fairgrieve, of BeFair international lawyers in Paris, said the receipt email could be backed up with reference to the WA’s article 18 (3) and the obligation to provide smooth and simple procedures under 18 (1) (e).

Solutions could, for example, include a work contract clause saying the person must produce a card within a defined period – with potential for an extension. He said similar contractual arrangements are common for other third-country nationals.