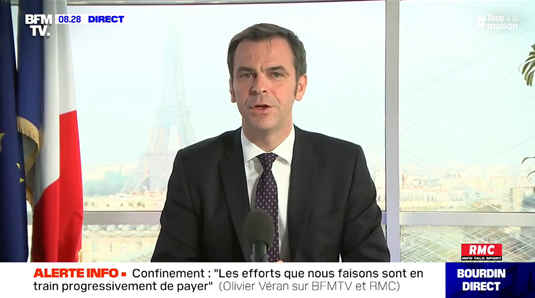 This shows that “the efforts of healthcare workers are helping us to get on top of the peak of the disease that we’re going through,” said Health Minister Oliver Véran in a speech last night.

“It’s not over, far from it, we’re not at the end of the increases in the epidemic. The path remains long and nothing is finished, as the figures show.”

He reported that there had been 6,494 deaths in hospital due to Covid-19 since March 1, with 605 new deaths in the previous 24 hours; there had also been 2,417 deaths in retirement homes, making a total of 8,911 deaths, including 833 in the 24 hours from Sunday night to Monday night.

“However the need to find new intensive care beds is increasing more slowly – 94 extra places, whereas it is was 140 on Sunday, 176 on Saturday, and we were at more than 450 last week.

“It’s an important indicator because it’s an indicator of the pressure in our hospitals on all the human and logistical resources.

“In total 17, 250 people have left hospital, more than 1,000 extra patients yesterday, to whom we must add tens of thousands of people who have recovered without hospitalisation.”

The minister added: “we owe it to our medical heroes to continue our efforts as citizens, that is just as precious to save lives, just as vital, by staying at home. That is allowing our hospitals to cope.”

He said a study by Imperial College London last week estimated 2,500 lives had been saved by confinement.

“Every eight minutes we save a life by staying at home; the impact is visible in areas where virus is circulating a lot.

"There’s enormous pressure on hospitals so we need to carry on with this effort and stay at home. There is a palpable effect and we’re seeing it.”

He said the key figure is the so-called ‘R zero’, that is the capacity of an infected person to infect others.

If the ‘R zero’ rate is at ‘1’ it means each infected person is on average infecting one other person. If it is above 1 the virus will continue to spread; if it is below, then the epidemic will slow and eventually disappear.

“My most recent figures attest that thanks to the confinement this R zero is around 1, probably a little underneath. In some areas it is well below and in some it’s above.

“So we must stay at home and must be patient; this is what will allow us to beat the virus,” he said.