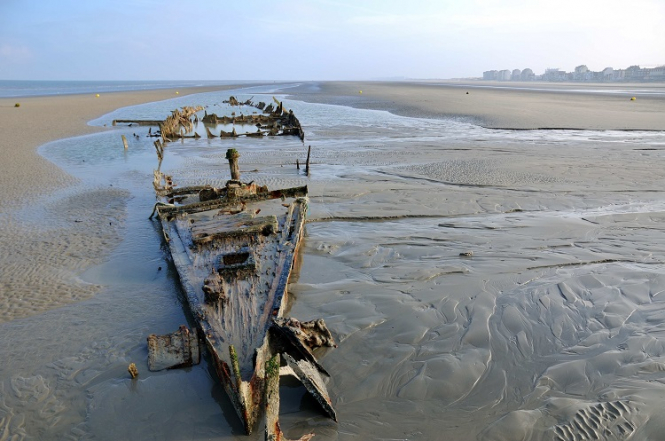 It was made possible by the hundreds of heroic civilian volunteers who sailed across the English Channel in an assortment of dinghies, pleasure cruisers and fishing boats to ferry soldiers from the beach to the large boats anchored offshore.

The operation was decided upon after significant numbers of Belgian, British, and French troops were cut off and surrounded by the German army.

The operation has been immortalised in countless films and books, which have told the story of those who made it home and those who did not.

British director Christopher Nolan is currently making a new film, Dunkirk, which is scheduled for release in 2017.

The shipwrecks on the sands today are stark reminders of the people who lost their lives and, of course, there are more shipwrecks, further out to sea, which remain permanently submerged.

Bruno Pruvost is a diver and knows them all.

He is also a volunteer guide at the Flanders Maritime Centre (CPIE). His guided walks along the beach are fascinating because he knows the history of the period inside out.

One of the wrecks still visible on the beach is the Crested Eagle, a 1925 paddle steamer which was requisitioned as part of Operation Dynamo (the official name of the operation to evacuate Dunkirk).

It was hit by three bombs and burst into flames before sinking with the loss of around 300 lives.

After the war, the parts of the ship above the sand were removed but as time goes on, the wreck increasingly comes to the surface and walkers can still make out the prow and location of the paddle wheels.

Mr Pruvost says some of the soldiers’ bodies could still be trapped within the submerged parts of the wreck.

“I’ve always been fascinated by local history, and particularly by the Dunkirk evacuation,” he told The Connexion.

“That’s why I got into diving, just to explore and find out more about the wrecks just offshore here. I’ve never bothered to go diving in the Mediterranean or anywhere else.”

He started leading guided walks in 2009 and organises them whenever the tide is low enough to unveil the wrecks, which only happens when there’s a so-called ‘super-tide’, which is around once a month.

“I time my walks for those very tides, when the wrecks appear. Numbers vary but I take around 30-45 people each time. We have to limit numbers, otherwise people can’t hear me, or see properly.”

Some of the people on his walks are mainly interested in the evacuations but, he says, others are more interested in the flora and fauna of the beach and ask him to name the seaweed and other living creatures on the wrecks.

Many French people do not know about the evacuation, he explains. “The British know about it, they’ve never forgotten. But the French have completely forgotten it, it’s not in the annals of our history. But when youngsters find out, when I tell them the whole tale, they’re fascinated and I think it’s important to remember.”

He is enthusiastic about the Nolan film. “I think it will really revive interest in the subject and show people just what happened here. They’ve been filming on these beaches. It’s a huge project.

“They’ve already rebuilt one of the digues and are reconstructing the town to make it look like it did in 1940.

“It’s amazing how they do that. Loads of locals are working on the film, including my two kids. They’ve taken on 1,500 extras.”

Mr Pruvost’s guided beach tours (French only) are free but places must be reserved in advance at the CPIE (03 28 26 86 76 or centreressources@cpieflandremaritime.fr).

The next ones are due for August 21, September 20 and October 19. Remember to wear wellington boots.