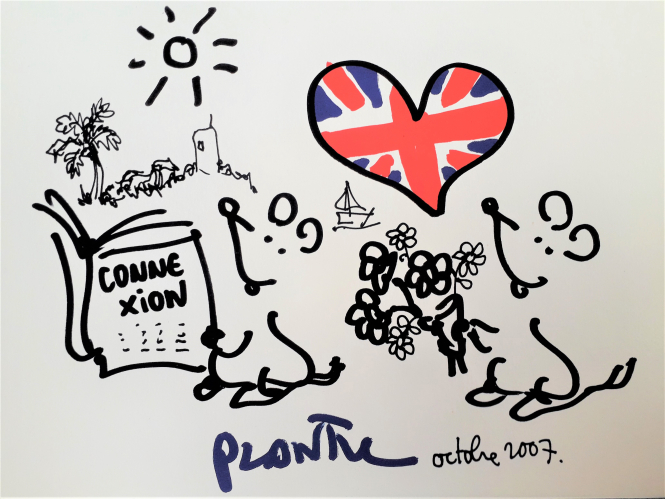 Pic: Cartoon drawn by Plantu for The Connexion, 2007

Plantu, one of France’s best-known cartoonists, retires from Le Monde today after almost 49 years – The Connexion met him in 2007 when he drew an image for readers suggesting affection between the UK and France.

Plantu, 70, whose drawings have featured on the front page of Le Monde every day since 1985, has drawn his last image for the newspaper dated April 1 which comes out this afternoon, Le Monde being one of France’s last ‘evening’ papers.

Entitled ‘Plantu et Le Monde, 50 ans d’histoire’ the drawing includes an image of his trademark dove holding a vaccine syringe, as a worried President Macron wonders what to announce to the public about the next steps to combat Covid-19.

It also shows a dove holding a question mark – a reference to his first drawing for Le Monde, in October 1972, when the question mark related to hopes for an end to the Vietnam War.

The dove went on to be one of his best-known symbols. A little mouse also started appearing frequently from the 1990s – a reflection of his own moods, according to press agency AFP – which featured in his drawing for The Connexion, and also features in today's image where a mouse with a heart above it is reading Le Monde and another is waving goodbye.

We met Plantu on the occasion of an exhibition by Cartooning for Peace, an international cartoonists’ network which had been founded the year before in a collaboration between Plantu and then UN Secretary General Kofi Annan.

He told The Connexion the initiative had arisen as a reaction to the scandal that followed the publication of Mohammed cartoons in Denmark and said: “The danger is that there is a fracture between the Muslim and Western worlds, and the goal of a cartoonist should be to bring us all together - Jews, Muslims, Christians, Agnostics, and to say, "Look, we want to continue to do drawings that are disturbing, annoying, political, critical - but without hatred.”

He sketched for us a quick drawing with one of his trademark mice reading a copy of The Connexion and another presenting it with flowers.

He also referred to his admiration for British Guardian cartoonist Steve Bell, who he said he found “extraordinary”.

It comes as Cartooning for Peace is now to take over from Plantu at Le Monde.

It means the daily cartoon could in future be by any one of dozens of French or international cartoonists, as the organisation now includes more than 200 professionals around the world.

Each day the association will suggest a selection of drawings and the editorial team will choose which one to use depending on the news of the day.

In an interview for FranceInfo Plantu says today: “You can’t imagine the enormous pressure of doing a drawing every day for the front page of Le Monde – the fear of disappointing people”.

However he also states in an interview with Le Monde that “I adored the paper instantly” and “everything excited him” once he started working there.

He states in the same interview that the fall of the Berlin Wall was one of the most memorable moments of his career and recalls the pleasure he took in caricaturing French presidents.

He says he was always a little kinder to women because of the pressure on them over their looks: “I tend to spare them, apart from, perhaps, Thatcher: She was Chirac with a wig and earrings.”

He also recalls his horror at hearing of the 2015 Charlie Hebdo attacks and states he has had to have constant police protection ever since.

He says he is stopping today because he does not want to “do one drawing too many” and for people to say “he’s hanging on, but he’s tired and isn’t doing anything new”.

Among his projects now is to visit schools to speak against hatred, he says.

“I see hatred and intolerance rising, racists and censors, a huge wave of antisemitism… I’m afraid. It’s not the time to desert.”

Plantu: The power of press cartoons

13 hours ago
4
Travel France: Are under 18s covered by parent's Covid vaccine status?

France votes to rehabilitate memory of soldiers shot in World War One
16 January 2022
More from Culture
More from Connexion
Get news, views and information from France
Join the newsletter
Subscribe to The Connexion