Stitches in time: The history of Bayeux and its tapestry 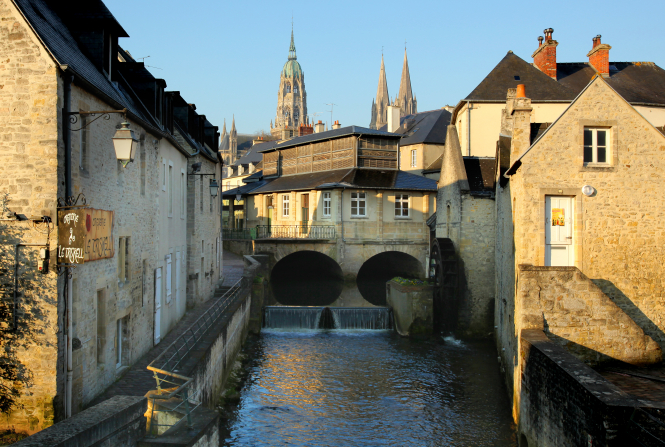 The close links between Bayeux and the British Isles have always been part of the town’s history.
By Jane Hanks

The story of the 11th century 70m Bayeux tapestry and its link with the town it is displayed in, goes back to William the Conqueror, before he crossed the Channel in 1066. He was already Duke of Normandy, and he wanted to rebuild Bayeux cathedral which had been destroyed by the Viking invasion in the 9th century. He put his favoured half-brother Odon in charge and made him bishop.

Odon, just 14 at the time, later followed William to England, and was awarded the title of Archbishop of Canterbury, while still remaining Bishop of Bayeux. Odon ordered an embroidery to be made telling the story of William’s successful conquest.

“The tapestry was almost certainly made by nuns in a Kent convent owned by Odon,” said Claire Merlier, city tour guide for Bayeux Tourist Office.

'Scientists who have studied the style, material and thread think it must have come from England rather than France'

“It was made for the cathedral as a clever political statement, to show that even though the Battle of Hastings was bloody and involved many deaths it had religious approval.

“Odon presented the tapestry to the cathedral at its consecration in 1078, with William, Duke of Normandy and now King of England, at his side.”

The tapestry was moved out of the cathedral after the Revolution when it became the property of the State. In the late 19th century, Napoleon III put it on show at the Louvre for a year.

“Once again,” Ms Merlier said, “it was being used for political purposes. For a while Napoleon III considered invading the UK and the tapestry was proof it could be done.

“It left the town a second time, when Bayeux was occupied by the Germans in the Second World War and was hidden with other treasures in a Sarthe château.

“But the Germans found it and took it to Paris, where Hermann Göring had it packaged up ready to be taken to his home in Berlin.

“Just in time the Allies arrived in the capital. The tapestry was saved. It was put on display in the Louvre once again until it was returned to Bayeux in 1943, where it has been ever since.”

In the Hundred Years War the English got their revenge for 1066 when they occupied the city, but only for 33 years.

“They were not at all welcome, but 500 years later it was a different story, when Bayeux was the first town to be liberated from the Nazis by the British on June 7 1944,” said Ms Merlier. “Many of its buildings were requisitioned as hospitals for the war wounded, so the town was never bombed and retained its rich variety of historic buildings.

“The streets were too narrow for the movement of troops, so the British built France’s first bypass, still called the Bayeux Bypass, but pronounced Bee-Pass in French. From it you can access the Bayeux War Cemetery, the largest one for the Commonwealth in France.”

Inhabitants also like to say that, for a few weeks, Bayeux was the capital of France: “It was here on June 14, 1944, that General de Gaulle made a famous speech, creating a provisional government showing the French were back in control of their country.

“Up until the Liberation of Paris in August 1944, we like to think Bayeux was the capital. Visitors from all over the world and France come here to see the tapestry, and quickly discover there is so much more to Bayeux.”

'I am the novelist I am because of Carcassonne'

6 hours ago
4
French farmhouse renovation: DIY tricks to get rid of rats