Street art: Before Banksy there was Blek le Rat 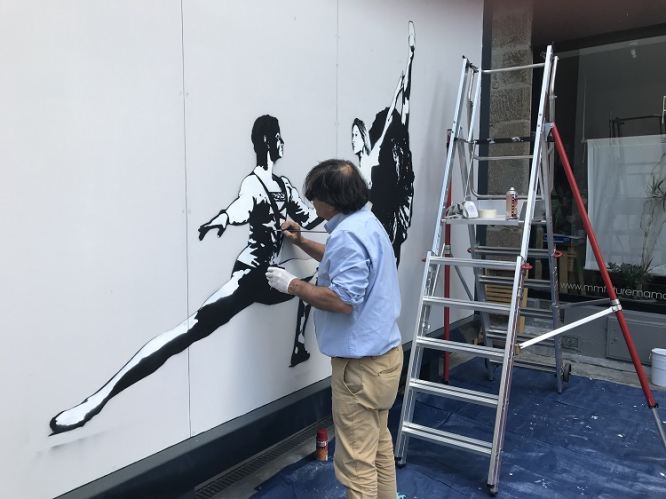 “Every time I think I’ve painted something slightly original, I find out that Blek le Rat has done it too, only Blek did it 20 years earlier.”

These are the words of Banksy in a 2008 Daily Mail article that was billed as the world’s first interview with him.

The article reports that Banksy is “a huge fan” of French artist Blek le Rat.

While Banksy has given the form new twists, the inspiration is evident, right down to the fact Banksy is now famous for using rats in his own images.

On September 1, Blek did the inaugural painting for the MUR de Rennes, a panel at 34 rue Vasselot, which will be used by an invited street artist on the first Sunday of each month.

His work can be seen until Novem­ber 2. It is the first time he has completed work like this in France although he has taken part in such projects in the US.

Blek is working on an exhibition in Hong Kong next month – and is looking forward to a big project in China for the “year of the rat” next year.

Blek, who was born in the western suburbs of Paris, told Connexion how his street art career came about.

“I had a trip to New York in 1972 and saw the first graffiti in the metro and in the streets. I was very impressed.

“You saw political slogans on the Paris walls but not graffiti tags. It was completely new to me and I didn’t understand exactly what it meant. It was an enigma to me; it intrigued me. No one was talking about it.

“It was only a few years later when I read an article by Norman Mailer, about graffiti, and notably TAKI 183, this guy who put his name all over the place in New York at the start of the 1970s.”

At the time a student of art and then architecture, it took until 1981 for him to “digest” what he saw, he said.

For his architecture diploma, he was helping create a terrain d’aventure – a play park for teenagers – in a banlieue. He said this kind of facility had been created for urban youths since the post-war period, to avoid them going to play in dangerous places like bombed-out buildings in their free time.

“Kids would steal paint and brushes from supermarkets and go and paint on walls in the park. They didn’t know how to paint, they painted any old thing – things like houses – but it reminded me of what I’d seen in New York.

“I was already a painter and loved art, so I thought, right, I’m going to make a name for myself, doing the same thing on the walls of Paris.”

His first attempts were in a wasteland where he tried New York-style tags. “It was difficult, I didn’t have the technique and it was hard to get cans of spray paint. I was using car paint.”

He started stencilling rats, which gave him his nickname.

“Paris has always been full of rats,” he said. “And at the time there were lots in the 14th arondissement, so I found it fun to paint them all over the place there. I had a lot of friends in the 14th [southern Paris] although I lived in the 18th [in the north].”

As for ‘Blek le Rat’, the name comes from Blek le Roc, a character from a cartoon book series from the 1950s-1960s that he enjoyed [he is an adventurous trapper of Breton origins, living in America during the War of Independence and outwitting the English ‘redcoats’].

In 1982/3 others started copying him, stencilling on the walls, he said.

To create a stencil image, he comes up with an idea – “I might think, why not do my son playing in the street?”

He takes a photo, draws the image on cardboard, then cuts out the parts in shadow so the lighter parts of the image remain the colour of the wall.

“It’s a very simple technique, similar to sérigraphie [screen printing], and can be done rapidly. Because the problem in the city is it’s illegal and you need to avoid the police. You can’t stay too long in the same place without being seen. So, it’s a tactic against the police, to not get caught and leave behind the most beautiful image possible.”

By the mid-80s it was possible to buy a spray paint in the Altona brand, he said. “Usually when I painted I wasn’t alone. There was one person keeping watch and holding up the stencil, and I was painting with the can.”

He wanted to catch the attention of passers-by. “I very quickly understood that it had a strong impact, that people reacted to them, and it was then that I realised I can transmit messages via my images.”

There was soon interest from the media, especially the pirate radio stations of the day. “I did a lot of interviews with them in the early 80s,” he said. Unlike Banksy, he did not worry about anonymity.

“Part of the reason for this was to become known, without going via the traditional system of galleries. I understood you needed to get talked about in the media – it was more important than the galleries.”

He frequently had run-ins with the police, he said. “They would stop their car and say ‘what are you doing?’ and they wanted to know ‘is this about politics?’. And I would say ‘no, it’s not political, it’s art’.

“And they used to say ‘ok, it’s nice, carry on’. But their attitudes changed after graffiti taggers started invading Paris [ie. spray-can graffiti that focuses on the artists nickname in a stylised form]. It started with Bando, a Franco-American, who started signing his tag all over Paris from 1983.

“The taggers went on the offensive, putting their mark all over the place, and there started to be negative reactions form owners of the walls who would report it to the police.”

Blek said he would never paint on historic monuments but apart from that no walls were off-limits as far as he was concerned. “I would even paint on police stations,” he said.

The ephemeral nature of street art is something he takes in his stride. “The fact that an image in the city won’t last and might be covered up; it doesn’t bother me at all.

"Personally I don’t much like the current fashion for having large completely painted walls [commissioned works, meant to last]. That’s not my art, I find it uninteresting and it’s not on a human scale, although it pleases the artist to do something huge.

"It has an impact all the same, but it’s commercial; it’s not really art.”

Blek said his choice of images is very varied but he often seeks to transmit a message. “For example in 2006 in London and Paris I did images on the homeless, to make people think about how it’s not normal that we leave some people to live outside. And in 2004 there was a journalist, Florence Aubenas, who had been kidnapped in Iraq, and at the time people weren’t talking about her, so I did a campaign of images of her that had an impact” (for an example, see here).

Now he only works on legal projects, to order, he said.

“I’m 68 now and it was never really my aim, my challenge, to act illegally. For some artists it is, but not for me. I felt very paranoid in the street when I was doing it illegally and didn’t really enjoy it. It suits me very well to do things legally now.”

Asked if he finds it strange that what was a clandestine form of art is almost becoming mainstream, with certain pieces [notably by Banksy] fetching high sums at auction, he said: “That’s how the world is, it’s inevitable. At the same time it’s interesting to live through that and see how the movement developed over the last 50 years. Graffiti started at the end of the 60s in Philadelphia and today it’s a real artistic movement and others have taken it and used it in their own ways, which I’m not against.”

Blek said he is aware that Banksy was inspired by his work and is “very happy” about that.

“He’s in a strong position – he’s taken this movement to a level we’d never have managed in France.

“The fact he’s English, also of course that he’s very good, and that he’s followed and helped by the English, and by the English system of galleries – he’s supported by the art market and the media and it’s a very English thing. It would never have happened in France. The English are very open to art, music, theatre, cinema, literature – much more than the French.

“France was famous for art in the 19th century and start of the 20th century, but it’s over now. People are preoccupied by other things. There’s still interest in art, but not as much as in England – the English are curious, they don’t judge, it’s easier for an artist or musician to get known and be supported by the establishment.”

Blek said he has been told by someone that knows him well that he met Banksy at a London gallery, though he did not know it at the time and does not remember him well. Many people know him, but the media play along with his aura of mystery, he said. He also believes Banksy probably asks media to sign agreements to not reveal his identity before he speaks to them.