A tour of French perfumes from Paris to Provence 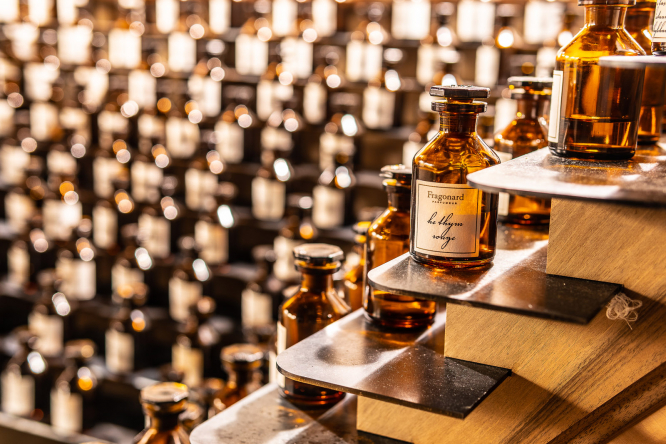 '“Louis XIV regarded perfumery as an art, and it is thought he even had perfume added to the fountains at Versailles' Pic: Grzegorz Czapski / Shutterstock

French perfume is reputed the world over for its elegance and style, and French perfume-makers are at the heart of the industry. It is no surprise that France is home to the Osmothèque, an international library of perfumes. The Hexagon also has some fascinating perfume museums, and a visit to them can lead to sniffing out a course in how to make perfume yourself.

Paris is home to some of the most glamorous perfume shops on the planet, so it stands to reason it has a perfume museum. The Musée du Parfum, near the Opéra underground station, offers free 30 minute tours around a small private museum owned by Fragonard Perfumes. An explanation of the various types of scents in a perfume is followed by an interactive display where visitors try to identify eight scents.

The visit ends via the shop but there is no obligation to buy anything. See their website for opening times: musee-parfum-paris.fragonard.com.

The real centre of the French perfume industry, however, is Grasse.

People have been wearing attractive scents since the dawn of time

The world’s first perfume-maker is thought to be Tapputi, a woman mentioned on a Cuneiform tablet from 2000BC, who distilled flowers, oil and other aromatics to create perfumes. Perfumiers proliferated during the Italian Renaissance, and in the 16th century, Catherine de’ Medici (married to King Henri II of France) had her own personal perfumier, René the Florentine.

This led to flowers being grown in the south of France specifically to produce perfume, particularly in and around Grasse (Paca). Until then the town had been known for tanning leather, and the resulting foul smell that hung around the town.

But as the perfume industry expanded, the town’s craftspeople began perfuming the gloves they made to disguise the smell from the tanning process, and became known as gantiers-parfumeurs.

The wealthy used the newly invented eau de cologne to disguise body odour resulting from infrequent washing. The Sun King (Louis XIV) regarded perfumery as an art, and is reputed to have even had perfume added to the fountains at the lavish Versailles.

The fashion for perfume at the French court was followed by wealthy people all over Europe, leading to a huge demand for French perfume, and since the climate around Grasse was ideal for growing scented flowers, it became the centre of perfume production. In time, the heavy cloying scents used to disguise body odour evolved into lighter, more subtle, scents. Napoléon and Joséphine set a fashion for scents featuring citrus notes.

As more eaux de cologne were produced, prices came down and the use of scent became more generalised. By the 18th century, France was the centre of luxury perfume production. The Industrial Revolution of the 19th century saw new techniques developed to extract scents, not just from plants but from minerals and animals too. The first mass produced perfumes included ‘Fougère Royale’ by Paul Parquet, ‘Jicky’ by Aimé Guerlain, and ‘L’Heure Bleue’ by Jacques Guerlain.

As it became possible to synthesize scents, they began to be added to all sorts of other products; washing powder, wardrobes, and interiors. In the 20th century, perfumes began to be associated with fashion houses, with the introduction of iconic perfumes including Chanel No 5, Miss Dior, and l’Air du Temps by Nina Ricci. Today, French perfume is used and appreciated by people from all walks of life, all over the world.

Fragonard was one of the first perfumeries established in Grasse

As well as Fragonard's museum in Paris, also has a selection of factories and museums to visit in and around Grasse, all of them free and all of them very interesting. In Grasse there is the Usine Historique (with the Musée du Parfum à Grasse on the third floor), the Fabrique des Fleurs, and nearby, the Usine Laboratoire d’Eze. Incidentally, if you do go to Eze, don’t miss the Jardin Exotique, which apart from having stunning views out over the Mediterranean, also has an extraordinary range of plants bearing witness to the mild climate.

Parfumerie Galimard also has a museum and workshop in Eze, explaining the way perfumes are made. If you take the bus up to Eze-le-Village, you could walk the very scenic Chemin de Nietzsche back down to Eze-sur-Mer.

If you cannot travel to Provence-Alpes- Côte-d’Azur, Fragonard’s website is very comprehensive, with lots of photos and is available in English so you can at least do some armchair tourism. The company has two other free museums, illustrating related topics. The Musée Provençal du Costume et du Bijou (clothing and jewellery) and another one, the Musée Jean- Honoré Fragonard, which showcases this painter’s career and works. (The perfume company was named in honour of him.) All these factories and museums offer free entrance and free guided tours in a variety of languages including English.

Grasse also has the much larger Musée International de la Parfumerie (MIP) and its gardens of aromatic plants, and is very informative about the history and development of the perfume industry.

Check before setting out, however, in case the interactive displays are closed. (At times during the pandemic they have been cordoned off and without being able to smell things, the visit does lose much of its lovely charm.)

For the foodie in Grasse

If all that sniffing makes you hungry, Grasse also has some great activities for foodies. In the historic centre, the Huilerie Sainte-Anne is one of the last traditional working mills in France making a range of different olive oils which you can taste on the spot. They also have a boutique selling local products including honey and balsamic vinegar.

If you have a sweet tooth, check out the Maison Duplanteur in Grasse, where they hand-make organic chocolate from scratch, roasting the cocoa beans themselves. The entire process is explained during a free guided tour, although you can simply visit the shop. Children love the tour, however, especially the free samples at the end.

France is home to a large number of privately owned museums

Some of these are very eccentric and others very well researched and curated.

In Graveson, near Les Baux-de-Provence and St-Rémy, there is a small museum called the Musée des Arômes et du Parfum, which divides public opinion and in Prissé, near Mâcon, is another tiny museum called the Musée du Parfum, displaying an extensive collection of perfume bottles. La Rochelle also has a perfume museum, the Musée du Flacon à Parfum, this time above a parfumerie called La Saponaire in rue du Temple, so easy to find.

Much further north, very close to the frontier, the prestigious Musée Lalique, about an hour north of Strasbourg by car, includes a beautiful collection of glass perfume bottles, if you love crystal and glass. René Lalique (1860-1945) designed all kinds of objects; vases, jewellery, chandeliers, clocks, and ornaments for the bonnets of cars.

He was best known for his designs in glass, however, and the flowing lines of his work in the Art Deco style.

Although he was born and died in Paris, he set up the Verrerie d’Alsace in Wingen-sur-Moder in 1922 because the area already had a skilled workforce. The factory is now the only one in the world still producing Lalique glassware. The museum was opened in 2011 and contains around 650 pieces of jewellery, glass and modern crystal. Revamped, the Villa René Lalique in Wingen-sur-Moder is now a 5-star hotel and restaurant.

While in the area, do not miss the Musée du Verre et du Cristal in Meisenthal where you can watch glass-blowers in action and find out how the area became such a centre of glass-making excellence.

The Artemisia Museum in Forcalquier, between Gap and Marseille, broadens the subject, exploring the history of growing plants for perfume, as well as herbs and medicinal plants. Depending on the time of year, it is possible to reserve workshop places for adults and children to make their very own perfumes.

While in Forcalquier, the biscuiterie is worth visiting. It is a factory outlet where in good times, you can taste the various local specialities although during the pandemic this has not been possible. It is a very charming shop however, and they also have an online boutique.

Given good weather, a great way to explore the surrounding countryside is on horseback.

The Centre de Randonnée Equestre Janssaud offers treks with an English speaking guide. It is a great way to scramble about the hills enjoying the views. The horses are well-trained, and as friendly as the guide. If horses are not exactly your cup of tea, you can hire mountain bikes to get around from Bike Access Haute-Provence.

Creating your own perfume

Creating your own perfume is an increasingly popular activity all over France and there are various workshops and classes on offer, ranging from a few hours to several months.

Plant ingredients include flowers, herbs, fruits, trees (like sandalwood, cedar, cinnamon), roots (like ginger), and seeds (like coriander). Animal ingredients include musk and honeycomb, and there are many modern synthesised essences. Various techniques are used including extraction, maceration and distillation in order to make concentrated essences.

At the most basic level, a selection of these is then added to an excipient (usually a mix of alcohol and water) to make a perfume. The different essences can be grouped into these two scent-families; traditional ones include florals, amber/ Oriental, woody, leather and modern ones include green, citrus, fruity, and fresh floral.

The relationships between them can be expressed on a so-called fragrance wheel, and combining them can be as simple as choosing one main essence and adding a tiny amount of a secondary one.

Création de Parfum offers workshops in Paris, Eze, Grasse or Lyon. Prices range from €99-200 and include an introduction into defining personal style, learning to recognise scents and creating your own perfume under the sensitive nose of an expert.

Participants leave the workshop with a bottle of their very own scent, and the recipe is kept so that you can order it again, if you like.

If you prefer to experiment on your own, there are lots of books on the market. You can also buy books (in French) at aroma-zone.com plus all the ingredients and containers needed. Just click on the Cosmétique Maison tab. Their products are organic and their recipes also include environmentally-friendly home cleaning products.