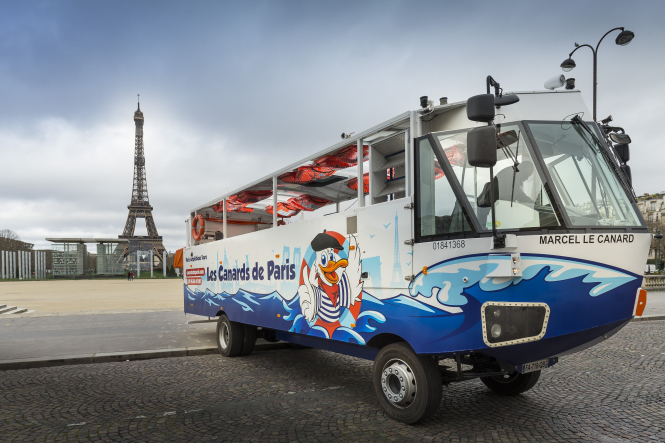 An amphibious bus is offering visitors to Paris the chance to experience the city from a fresh perspective  –  and is proving popular with tickets sold out now until September.

Marcel le Canard (‘Marcel the Duck’) was launched by engineering start-up Les Canards de Paris in July and is the first bus of its kind to be approved for road use in France.

Departing from the base of the Eiffel Tower, Marcel embarks on a tour of Paris’ major landmarks – from Les Invalides to the Champs-Elysées – before swapping land for water at the île de Monsieur in Hauts-de-Seine with what the Canards de Paris call a “spectacular splash!”

The bus then spends 20 minutes travelling along the Seine, taking in the sights of the Parc de Saint-Cloud, the Bois de Boulogne and the skyscrapers of La Défense before returning to land.

Passengers are guided by comic actors, chosen for their enthusiasm and sense of humour, who complement the tour with snippets of Parisian history.

“This bus is a veritable moving stage, which offers a truly wacky and original visit to the capital!” said the Canards de Paris team in a statement.

The tour – tickets for which start at €15 – has already proved popular among French visitors to the capital, with Canards de Paris co-founder Philippe Mallet telling The Connexion today that: “It’s going very well. We are now fully booked for the rest of August, with spaces filling up for September and October.

“People come to experience the splash, but the whole trip is really lively. Our guides make it fun for everyone.

“For example, there is a moment where the bus passes through a tunnel with flashing lights, at which point they turn on the Bee Gees’ [song ‘How Deep is Your Love?’] and everyone has a dance in their seats.

“Customers arrive having never heard about us before, but always leave happy!”

How does Marcel le Canard work?

Marcel’s wheels are joined by a propeller which, along with its lightweight and watertight aluminium casing, enables it to float along the river.

The CO² released by the bus is offset by a tree planting operation carried out in partnership with French company Reforest’Action.

This amphibious bus is a project seven years in the making, and comes as part of a wider initiative to create the world’s first totally electric amphibious bus.

Co-founders Mallet and Paul Michel are working with Volvo Trucks to achieve this goal, and are now developing a hybrid bus with a more powerful, 66kw electric engine.