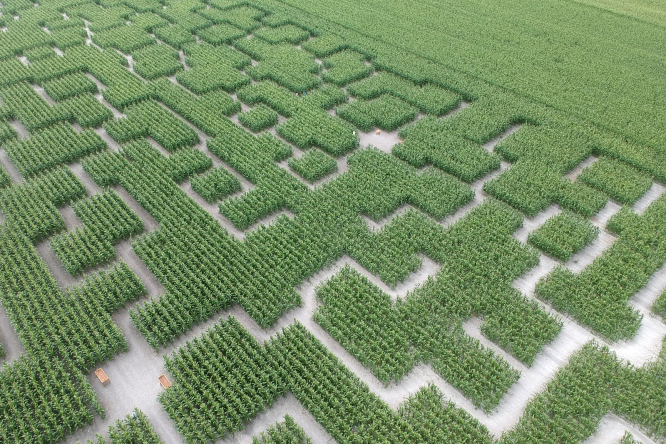 Mazes are not a new phenomenon, – they date back to Greek mythology – but they are increasingly popular in France as a tourist attraction, in particular maize mazes. One company, Pop Corn Labyrinthe, in the West of France, approaches farmers or landowners to sign up with them to grow a maze every year on their land.

The founders, Marie and Frédéric Guilbert, a couple from Brittany, started with one in 2009 at the Presqu’île de Rhuys in the Morbihan. The following year they added a second one in the Quiberon Bay, and now they can be found in the Landes, Loire- Atlantique, Vendée, Charente-Maritime, and near to the towns of Angers, Bordeaux, and Paris.

This year 10 more opened, bringing the total to 23, with even more due to open next year:

“It is working very well,” says Marie Guilbert. “Since confinement, many farmers have realised they need to diversify to ensure a decent income and many are attracted by the idea. We are always looking for new places to set up our mazes, and even hope to take them out of France if possible, into Spain and Switzerland.”

It is Mr Guilbert who designs the labyrinths: “It is not easy,” says his wife. “He draws them on paper first and has to take into account the different sizes and topography of each site. Each one is unique and he then comes up with a new one for the next year, so that they are never the same.”

The fields are around four hectares in size, with five kilometres of paths in each, and the aim is to find a way out.

On average it should take around 1h30, and for those who are struggling, and walking round and round in circles, there are escape exits.

The farmer plants the whole field, and then in early spring, when the maize starts to grow, the Pop Corn Labyrinthe team move in and remove the young shoots where necessary to create the paths. By the beginning of July, the maize is tall enough, to make it impossible to find the way out by looking over the top.

They are open from July until the end of August, with some continuing through into September.

“Coronavirus means the mazes are popular with visitors, because it is an outdoor activity. All ages can have fun, and for some children, it is the first time they have seen cereal growing.”

All over France, there are many tourist attractions including mazes, of all types and styles. At Le Bugue, Dordogne there is a “prehistoric maze”, amongst rocks and mirrors, and this winter employees at the ski station of La Clusaz, Haute-Savoie spent three days creating one out of snow.

Sur le Sentier des Pas Perdus at Romagne, Vienne, has four different types of maze at different levels of difficulty. There is one with grassy paths where you can easily see the layout, one out of wooden fencing with a medieval theme, one with hedges and quizzes on ecology and the hardest, according to co-founder Béatrice Blaudeau, the maize maze:

“It is a real labyrinth with no clues on how to get out so it is a challenge. My husband, Laurent and I design it and create it when the maize is only a few cms high, but even so, when the crop is at full maturity in mid-July, I find it as hard as anyone else to find my way out.

“Locals come back year after year to try out the new design, which changes annually, because they have a real sense of achievement when they reach the end.”

She trained in tourism and her husband was a farmer, and they decided to diversify using their joint skills by taking advantage of a growing number of visitors to nearby Futuroscope and a new animal park:

“Over the past twenty years we have developed the theme to open for a longer season, as maize is only really viable for July and August. We were worried Covid would affect our business, but in fact we had the same number of visitors in 2020 as other years.”