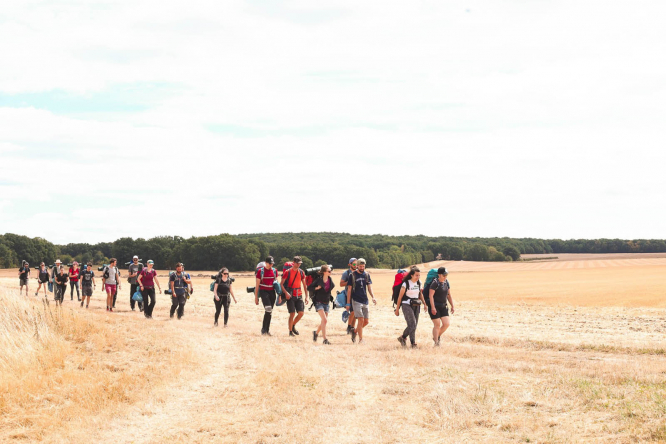 Walking is becoming a popular pastime for city dwellers in France wanting a change of scene on their days off Pic: Léna Perdrigé

With thousands of pathways across the whole of the country, walking and hiking has always been a popular pastime in France. Since Covid-19 and confinement a new generation of younger hikers is taking to the country lanes, escaping the enclosed spaces of the city.

There is a huge choice of places to walk with footpaths criss-crossing the country, both at commune and national level, in the mountains, along the rivers, by the coast, in the plains and valleys.

There are circuits ranging from those for the occasional walker who fancies a short stroll to the most demanding for sports lovers who want a challenge.

FFRandonée looks after 206,000 kms of paths, many of them labelled Grand Randonnée with the familiar white and red striped sign postings or the Grande Randonnées de Pays with yellow and red marks along the way.

A 2016 survey by Atout France, the official agency which promotes France as a tourist destination, found that walking was the most popular activity for the French on holiday. 21 million holidays were based around walking, up 25% in comparison to 2007.

Now, walking is becoming a popular pastime for city dwellers wanting a change of scene on their days off.

31-year-old Clément Lhommeau moved to Paris from the Vendée for work ten years ago and missed walking in the countryside. Like many in big towns he does not have a car so he set out to discover walking opportunities he could reach by train or metro:

“I found it was possible to access different kinds of landscape within 15 or 30 minutes by train from central Paris. There are forests, fields, national parks, rivers and the chalky cliffs of the Seine all close-by. I launched my finds on the website helloways.com in 2018, and it has developed amazingly quickly.

“It is now my full-time job and we are a team of three. We propose walks around eight cities in France and two in Belgium. Publishers Gallimard approached us to write a book and we have recently published one outlining 40 different walks within easy reach of the capital using public transport.”

The biggest leap in numbers was in May last year when the first confinement ended and people could go within 100kms of their home: “Over 2 million people have looked up our walks since we began. People can join our club for €39.90 a month which gives access to the whole catalogue of our walks. Covid-19 introduced people to the benefits of local tourism with extraordinary experiences not far from your front door. You do not have to travel to the other side of the world to have an adventure.”

This is the philosophy behind microadventures, a term coined around ten years ago by British adventurer and author, Alastair Humphreys. He describes it “as an adventure that is short, simple, local, cheap – yet still fun, exciting, challenging, refreshing and rewarding.”

Clément Lhommeau says this trend is catching on in France and he includes “Micro-Aventures” on his site: for example, from Lyon there are five suggestions for hikes which take from two to seven days with and some taking you right up into the mountains.

“We are refreshing the way in which people see walking and giving it a new, trendier image related to slow-tourism, adventure and sustainable living. It is attracting younger people who see quiet walking at the weekend in fantastic surrounding as an antidote to weeks at work in front of screens where everything moves so fast.

“Each town we are linked up with so far has its own Facebook page, Rando&Co where you can join organised walks. That too is really popular because it is a way for people who are often isolated in towns to meet new friends.”

WHO recommends lifting of international Covid travel bans
23 January 2022
More from Explore France
More from Connexion
Get news, views and information from France
Join the newsletter
Subscribe to The Connexion