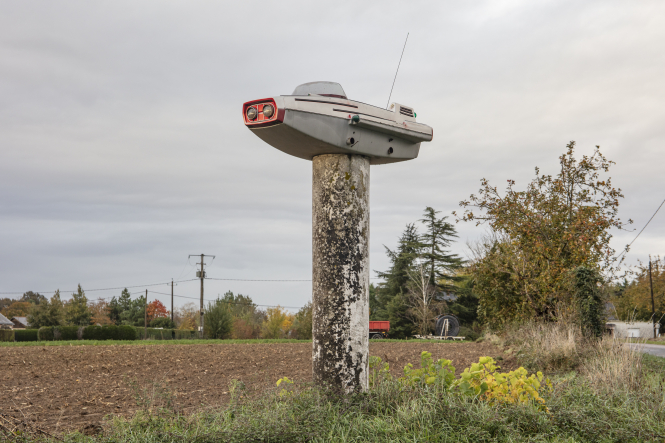 Find a lot of online of the Atlas photographs online by searching not only by location, but by colours or shapes, too Pic: Atlas des Régions Naturelles

The ‘Atlas des Régions Naturelles’ is a unique exploration of the human impact on the countryside of France, the constructions and in areas way off the trodden path.

The project which began four years ago, is a joint collaboration between Nelly Monnier and Eric Tabuchi. “I had been photographing grain silos south of Paris, and it expanded from there,” he says.

“We are interested in all sorts of human constructions; workshops, advertising, shops, garages... how they are made and used, their lives. There are so many ways of constructing buildings and we want to document the relationships between the natural world and architecture.

“We look at constructions which are not classically beautiful and try to show the beauty in them.”

He says they do also photograph chateaux and other buildings which conform to mainstream notions of beauty. “But we want to reflect the reality, which is that there are more modest constructions than grand ones. There is no intention to create a hierarchy in these buildings, however. We aim to show the richness of all of them. We want to show the beauty in daily life, in modest things.”

Many of the photographs in the Atlas are already online and can be searched in a variety of ways. Obviously it is possible to search by region and by category of construction.

But intriguingly, it is possible to search for colours or shapes. If you search for green, you not only find green buildings, but also a large green water-slide. If you search for ‘2000’, you will find a whole selection of shop fronts containing 2000 in the name of the shop. “Once, 2000 was the future,” says Eric Tabuchi.

The pair travel extensively, but say it is impossible to say which is their favourite part of France. “I like the Massif Central because it was so isolated over a long period, so we find lots of beautiful things there, rare things. But every time we set off on our travels, we fall in love with a new region all over again.

“The variety and richness of the culture and diversity of France amazes us again. France is full of many different countries in fact, and it’s a miracle that it is one unified country. It’s so easy to see the different cultures and histories.

“We love roofs, which are so different all over the country. We document the materials used, and the fabrication methods because roofs give a lot of information about the surrounding geology as well as the society.”

The Atlas is a massive project and he says that without a set date, it would probably never be finished. They have, however, set a symbolic end date of 2025, for the first 25,000 photos. “But when we get there, I expect there will still be lots of new things to find. By that time we will have done the project for 10 years, but I wouldn’t be surprised if we continue adding to it and updating it.”

The project is a passion, but is also their daily bread. “We are not motivated by profit, but obviously we have to pay our way.” They therefore sell photos from the project in order to afford to continue travelling, and producing the Atlas full time.

“We generally travel for two weeks taking photos and then spend two weeks at the workshop sorting the images, selecting the best ones, uploading them, building and maintaining the site, as well as selling photos. It’s our life.”

To support their work, you can buy photos from atlasrn.fr. Later this year, in October, the first volume of the Atlas will be published in book form.