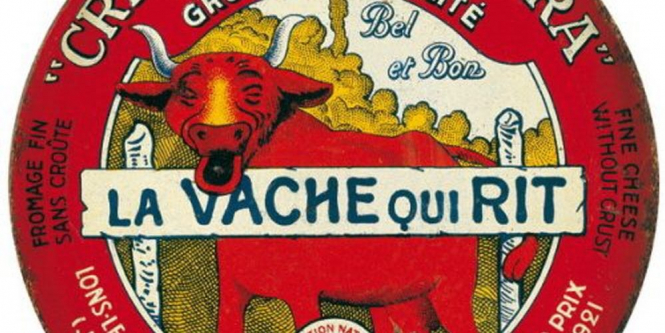 French spreadable cheese La Vache Qui Rit – known in English as The Laughing Cow – is celebrating its 100th birthday this month. We look at how the distinctive Jura cheese went global.

La Vache Qui Rit is a soft, spreadable cheese, with a mild flavour, and one of the major cheeses of its kind sold in France. It is produced by Bel (arguably best-known for its BabyBel product).

It is sold in distinctive red, white, green and blue packaging, with the friendly cartoon face of the ‘laughing cow’ clearly visible on the pack. Each circular pack opens to reveal triangular portions of the cheese, which are individually wrapped in foil.

The Bel group now produces more than 20 million portions of the cheese every working day, the equivalent of some five billion little triangles a year.

How did it start?

The brand name was first registered in 1921 by Jura cheesemaker Léon Bel, who was inspired by a cheesemaking process he had seen in Switzerland.

The cheese was first sold in one large portion. The separation into individual triangle portions appeared three years later.

Industrial production under the brand “Vache Qui Rit” began in 1926, in a new factory in Lons-le-Saunier, Jura.

How popular is it in France?

The idea behind the cheese was always to create a popular product, reasonably priced and easy to transport and store - and it appears this goal has been achieved many times over.

Figures from consumer researcher Kantar Worldpanel show that in France between April 2020 and March 2021, one in three homes had bought the cheese over the past 12 months.

This is equivalent to 29.1 million transactions including the cheese over that time period.

Why is it so popular?

From Jura to global fame

The cheese is now known internationally, including across Europe, the US, Africa, and Asia.

The first factories outside France opened in 1929, in Belgium and the UK, followed by production in the US in the 1970s.

The globe-trotting brand also has a range of different versions across the world, depending on local tastes, regulations, and expectations.

It contains more iron in Morocco, more calcium and Vitamin D in Vietnam, and has a stronger cheese taste in the US. Different countries also have different ‘triangle’ portion sizes.

Pauline Prin Dumeste, international strategy and communications director at the Bel group, said: “Portion size is a real game for us. We don’t really need to change the actual product much, but we can easily adapt it to other needs and flavours.”

While in France, the classic version of the cheese - along with a lighter version - tends to be the most popular, international versions include a much wider range of flavours and mixes.

In Europe, there are versions sold with black pepper, garlic, and ham. In the US, there are cheddar and bacon varieties; roast chicken, and crab versions in Vietnam; and an olive variety in Morocco.

There are also light, extra-light, and lactose-free varieties; and in Asia, where sweet-and savoury products sell well, there is even a version mixed with strawberries.

We teamed up with @ilovedaisycakes to bake up 100 special Anniversary cakes at a special price of $19.21 to celebrate 100 years of laughter. Order yours before they're gone. #ChooseToLaugh https://t.co/mUfcWtp4OU pic.twitter.com/kM7TsIeyMh

New challenges for the future

As consumers become more knowledgeable about nutrition, and food trends tend towards more natural, less processed products, the cheese has faced some challenges.

The use of the new nutritional Nutri-Score, and the rise of the health app Yuka, had an impact on sales, due to the cheese scoring low on figures such as salt content, and additives that help it maintain its texture and stay fresh even at room temperature.

But the brand has responded by creating an organic version of its core product, and working on new, ‘healthier’ versions, such as half-milk, half-vegetable protein varieties.

These include versions launched in the US, Germany and UK last year, dubbed “Blends”, which mix the classic cheese with chickpeas and herbs, lentils and curry, and chilli beans and paprika.

Ms Prin Dumeste explains: “We felt that sales were flagging a little in France and worldwide. We had perhaps let the brand run on alone a bit too long. it seemed a little stale. We gave it a boost with a new campaign and we reversed the trend.”

Bel is also looking to introduce the cheese to yet more markets, including in developing countries.

While most of its sales are through supermarkets, it is also looking to expand its distribution among street sellers and street food vendors, especially as the cheese does not need to be refrigerated to remain edible.

The company is therefore looking to legitimise these seller networks, and offer them training, business support and health insurance in return for a certain level of sales.

Franglais ou Frenglish? The history of French resistance to English
15 June 2021
More from Food and Drink
More from Connexion
Get news, views and information from France
Join the newsletter
Subscribe to The Connexion