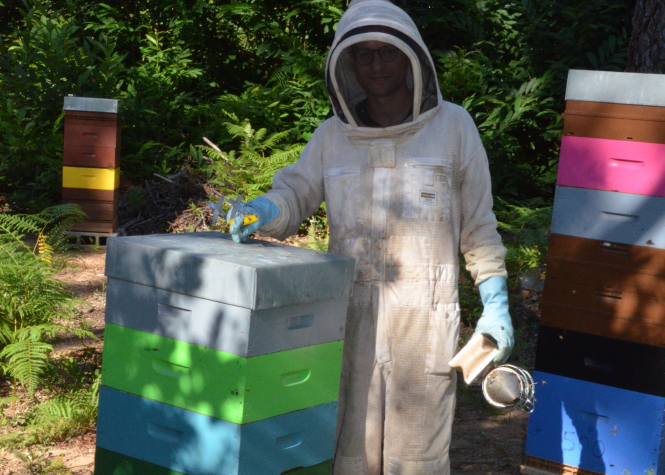 There are around 54,000 beekeepers in France producing on average 20,000 tonnes of honey a year, which is about half the amount eaten in the country. There used to be enough honey produced in France to satisfy demand, but beekeepers now face innumerable problems and 50% has to be imported, mostly from Spain, China and the Ukraine, which creates a new dilemma as overseas honey is cheaper.

However, there are new young beekeepers starting out on the adventure to produce honey, aware of the ecological need to increase numbers of bees and passionate about apiculture. 32-year-old Benoît Serre has 140 hives spread around the countryside in woods and meadowland near to his home in Saint-Avit-de-Vialard in Dordogne.  His company Rucher du Marandou produces several varieties of honey made by around eight million bees.

He began beekeeping seven years ago after a serious car accident which meant he could no longer pursue his first career as a builder: “My great-grandfather used to have twelve hives to keep the family in honey, and there was just one left on the family farm, which hadn’t been looked after properly for years. I wanted to save it and quickly became fascinated. I went on courses, bought equipment and went all over the department recuperating swarms. By the end of the first year in 2013 I had 31 hives.”

What does beekeeping entail?

He says he is fully occupied all year round: “My first job is to take care of the bees and that is increasingly difficult with changing climate, disease, the Asian hornet and pesticides.” He is fascinated by the way the bees function, crucial knowledge for helping them to survive. In winter, he says the bee population is reduced to around 20,000 as they hibernate.

In February, the Queen starts to lay eggs to increase the population so there will be between 60 -80,000 in the summer, enough to carry out the huge amounts of work necessary to keep the hive going, including fetching nectar and pollen from flowers, feeding the young bees and covering the full honeycombs with wax.

The Queen can lay 2,000 eggs a day. She lives three to five years. During the summer the worker bees, who are female but cannot lay eggs, only survive for a month, literally worn out by their workload. In winter they are designed to live for six months, so the hive stays alive. The male drones stay in the hive and their only role is to reproduce with the Queen. They are fed by the worker bees. They are born in April, but by the end of July, they are no longer needed and they are kicked out to die. If they try to re-enter they will be killed.

During the spring the bees will bring back nectar and pollen from whatever is in flower. If beekeepers want different types of honey, they must collect it as soon as one flowering is finished, so it will not be mixed with any other. Benoit Serre first collects honey made from wild spring flowers, followed by acacia, lime and chestnut.

In the summer his honey comes largely from honeydew, produced by aphids. In a symbiotic relationship, ants protect aphids in return for food which they produce from their bodies in the form of a sticky syrup. The bees also make sure they get a part of this feast which they take back to the hive.

Each honey has a distinctive flavour: “Acacia is the most popular and is mild and delicate. Chestnut has a hint of bitterness, lime is minty and the summer forest honey is woody and caramel flavoured.” Some honeys become solid over time and this depends on the flower it comes from. Some like colza will change in under 24 hours, some like acacia will always stay liquid.

The French prefer liquid honey, while in the UK consumers often enjoy the pale creamy texture which is produced by gently stirring the honey in big vats. Autumn is a key moment, when the bees must be strong enough to survive the cold months and the hives must be insulated and shut down for winter.