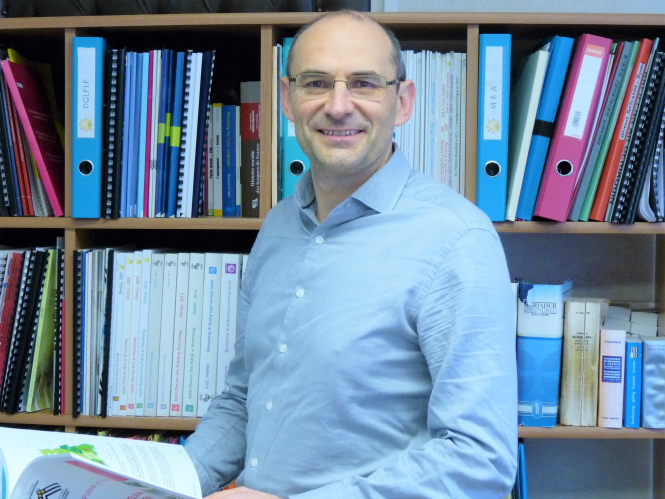 Fulup Jakez, the director of the Office Public de la Langue Bretonne (OFLP), talks about the significance of the new law and the role of regional languages in France today.

What is the OFLP and what do you do?

It is a public agency created by the state in 1999 to promote the knowledge and usage of the Breton language within the framework of bilingualism of French/Breton.

We support associations working on Breton language and culture and one element is to open bilingual schools, give parents information, and coordinate with mayors. We also work on the language in terms of translation and new terminology, helping to create new words when needed.

What will the new law change?

Apart from the 1951 Loi Deixonne, which was repealed in 2000, there was not really any law on regional languages. So this is historic, politically and symbolically.

It is important that it was voted by a large majority (247 for, 76 against, 19 abstentions) in a full Assemblée Nationale. It was also against government wishes. It is very rare a law from the opposition is approved.

Why did the government oppose it?

It is not specifically this government. It is the first regional language law for 70 years, there is... an ideological blockage in high echelons of administration. France considers itself a monolingual country, refusing to accept the reality of regional languages.

Some MPs preferred, instead, a focus on increasing national education...

Unesco classes all French regional languages as in serious danger of disappearing. What we, the people who work in regional languages, have been asking for for a long time is a legal framework for the protection and promotion of the languages.

This law is well overdue. Since the end of the 19th century, there has been a movement in national education to teach French in place of regional languages, rather than within a bilingual framework.

If regional languages are in danger of disappearing, why are they important?

Why? I am Breton. Breton is my language. It would take the whole morning to tell you why the language I speak is important. It is the story of history and culture.

It has been there for hundreds, thousands of years. It is normal for people to want to defend their history, culture and language.

Is it your mother tongue?

No. I am of the generation where parents believed teaching children a regional language would be bad for them.

I never learned a word of it at school and nothing about Breton culture.

I had the impression of growing up a foreigner in my home country. There was no link between what we learned at school or read in the media and what, for example, our grandparents told us of Breton culture.

How many people speak Breton today?

It is hard to say. There is no linguistic question in the national census but a 2018 survey estimated a little over 200,000 Breton speakers – there were 1.5million at the beginning of the 20th century.

Why is there no linguistic question?

France considers itself a monolingual state, refusing to recognise the reality that more than one language is spoken. It is ideological and political. Consider the immigrant population: there is a will, by the state, not to know or document those who speak Arabic or Turkish, etc. We all speak French.

Who speaks Breton today? If I walk the streets of Brittany, will I hear it?

There is a gap in generations because in the 1950s, 60s and 70s it stopped being passed down by families – it was not considered useful. There are essentially two groups who speak it: those roughly over 60 or 70, and the under-20s, who had a bilingual education. Between 20 and 60, there are speakers, but much fewer. I am 53 and completely in this generational gap. Not many people my age speak Breton.

You will not have much chance of hearing Breton in Brittany. You are more likely to see it – on road signs or on posters, etc.

The further west you go, the more aware of the language you will be. Around 5.5% of the Brittany population speak Breton.

Do you have a favourite Breton word?

I like the word hunvre, which means dream. It comes from hun, which means sleep, and bre, for “magic spell”. I find the etymology of this word beautiful.

At the OFLP you invent Breton words if needed. How does that process work?

It is not that difficult. There are many techniques: we analyse the word and look at others already in the language and use them to create a new word. Or reuse words that did exist but have disappeared. You can use them by modifying the meaning.

You can also borrow a word directly from French or English, or whatever. Or borrow a word but adapt it to Breton pronunciation and style – so ‘‘economy” in Breton is ekonomiezh.

You can also recreate a word using Celtic roots, via a prefix or suffix. Telephone is pellgomz – we adapted the word “tele” from Greek, meaning far, and “phone” or “phono” for voice or sound. We put Breton words for “far” and “spoken” together for pellgomz. We also sometimes take words from Welsh, which is very close to Breton.

What is the future of Breton and, in general, regional languages?

It is hard to say. But it is certain we needed this legal framework, although law will not save the language. It is the willingness of speakers to maintain it, promote it and develop it. The attitude of the population is essential. It helped pass the law.

Why do French people say 'quinzaine' for two weeks?

2 days ago
3
Tax cuts in France: Where have residents benefitted the most?

1 day ago
5
Should France's 130km/h motorway speed limit be lowered?

The Connexion is hiring an experienced journalist
20 September 2021
More from Language
More from Connexion
Get news, views and information from France
Join the newsletter
Subscribe to The Connexion