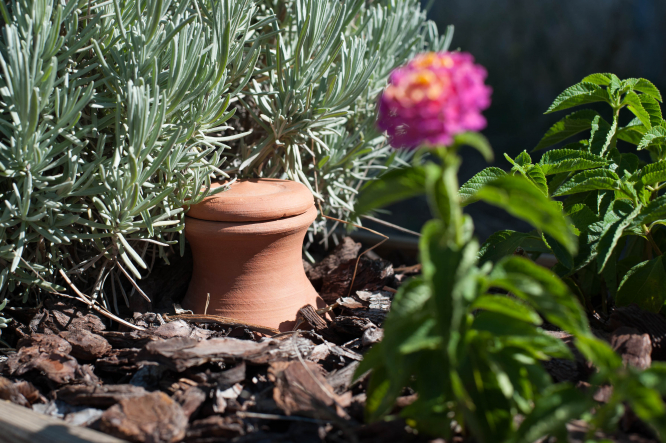 The Oyas Watering System reduces watering by up to 70%. Photo: Oyas Environnement.
By Connexion Journalist

It claims its pot system uses 50-70% less water than classic methods and is particularly appropriate in drought and heatwave conditions. Oyas Environnement worked for two years perfecting the system with the help of government research bodies CNRES and Inra.

The system uses hand-thrown clay pots that get buried in the ground near to plants. The water seeps out slowly due to the micro porosity of the clay and the capillary action of the earth, which draws out the water until the soil reaches its maximum humidity capacity.

Company co-founder Frédéric Bidault said: “The soil reacts a bit like a sponge, attracting water until it can hold no more. The really positive aspect of this system is that it is auto-regulating, so that the soil will only ask for water if it needs it, and none is wasted. The gardener will be able to fill their pots with water every three or four days during a dry heatwave instead of watering every day, and all the water will be used directly by the plant and none will evaporate, as it does if you water directly on to the soil.”

He said that in the research phase, the team looked at shape, thickness, choice of clay and firing temperature, vital to creating just the right porosity for the pot. “We have used modern science to perfect an ancient technique,” Mr Bidault said. The company is based in Saint-Jean-de-Fos in the Hérault, which is well-known as a picturesque village of potters. In six years, the business has grown so that the team now produces around 130,000 Oyas a year.

“All the pots are hand-thrown, so we are able to employ potters and revive this craft. We also work with other established potteries in our village and have workshops in Toulouse and Besançon. We sell in France, Belgium, Switzerland and Luxembourg, with mostly online sales,” Mr Bidault said.

He added that they get requests from all around the world but as their aim is to preserve the environment, it would be against their ethics to ship pots as far away as Australia and South Africa. “However, we are beginning to work with Oxfam to see how Oyas might benefit poorer countries short in water supplies. We sell to home gardeners but also to farmers.” There are four sizes of pot, from XL at 10 litres costing €24, which will water a 1m2 veg plot, to the smallest 0.3 litre pot at €11.50 for window boxes and planters. There are also tiny versions, which are not buried, for pot plants.

At present, the company is a victim of its own success. “We had to close down for two months during confinement, which was also a time when people’s interest in gardening increased and we have a backlog of orders, so a delivery delay of around 14 weeks. We are still taking orders so people can have Oyas for next year’s season.”