Nature in France: what are those shiny blue bumble bees? 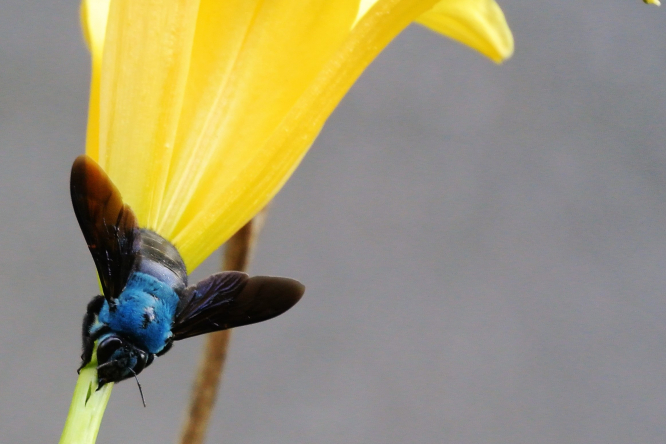 Nature in France: what are those shiny blue bumble bees?
By Connexion Journalist

We have seen lots of what look like shiny bumble bees with blue wings in our acanthus flowers. Are they a new invasive species and are they dangerous?

They sound like a bee called a carpenter bee, unsurprisingly also known as blue bees. In French, they have various names including abeille charpentière, abeille perce-bois, Bourdon noir or Bourdon bleu. The latin name is Xylocopa, and they are common to France and southern Europe. They are similar in size to bumble bees, but very different, living solitary lives and not in colonies.

As their name suggests, they chew out holes in dead or soft wood and live in them, raising their young. The females do have a sting but very rarely sting humans, and when they do it is usually because they are being crushed. Carpenter bees sometimes chew holes in young trees, particularly apple trees, leaving sawdust at the base of the trunk. The damage looks terrible but the trees do not seem to suffer and after a few years the hole has usually recovered.

Blue bees are often among the first insects to make use of the “insect hotels” some people put up in their gardens, and this might be why more of them are being seen now. While picking acanthus flowers – to make pot-pourri, for example – be careful to check that there are no blue bees sleeping in the middle of a flower, as they sometimes do.