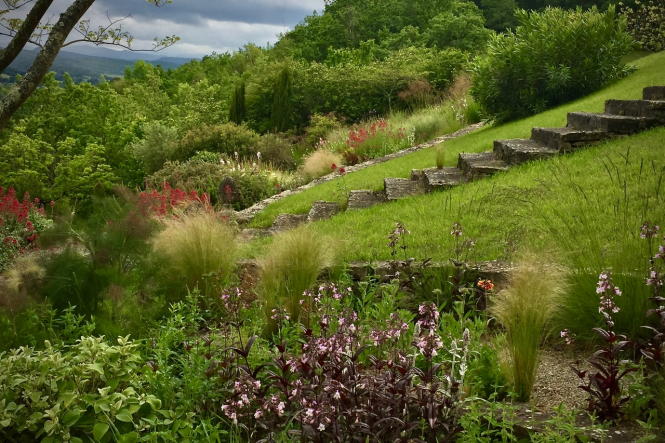 With regret Open Gardens/Jardins Ouverts, which encourages gardeners of all nationalities to open up their gardens, big and small to the public, to raise funds for charity, has decided to suspend all garden openings and events for the foreseeable future, due to the Covid-19 confinement period. We take look at some of the many wonderful gardens that would have opened their gates this month, had it not been for coronavirus.

June Williamson has opened her garden at Mirepoix, Ariège with majestic views over the Pyrenees for five years for Open Gardens and raised a lot of money for the charity. She has created an eco-friendly, dry garden where the only watering she does is a minimal amount in the veg plot and pots: “I think it is especially important now that water is so precious to avoid using it on the garden. Over the years I have experimented with different plants so that even in long rain free summers the garden works without watering. We have to learn to garden with nature.”

She has a clay soil, which is heavy to work but does have the advantage that it is full of nutrients and retains moisture. When she started out she could not find information on how to create a dry garden because though she is in the south she does not have a typical Mediterranean garden and winter temperatures can go as low as -15°C. This means there has been a lot of trial and error: “I have found the plants that work best are perennials with long tap roots. Grasses, do really well and so does Gaura and Verbena bonariensis. In one area I have mixed gravel into the clay to make it drain better and there I have a collection of Euphorbia.

My favourite, Euphorbia Rigida, has a long season starting in February. There are three annuals, Cosmos, Ammi and Cerinthe which self-seed. I usually find it takes two to three years to get a plant going and once it is established it doesn’t need much attention.” She also mulches using cocoa shells, straw, and grasses when they are cut back in the autumn. “I only use a thin layer, because if not the plants can’t self-seed.”

Le Jardin de June is a labour of love and Mrs Williamson spends five to six hours a day in it from February to May. It is set on a south facing hillside and it is terraced, not in the classical way but using the contours. “Mine is a sensual rather than an intellectual garden and the visitor can wander along paths that wind through the plants.” She says she aims to create a series of tableaux which change with the seasons. There is a vegetable area with high purpose built raised beds “to give my back a bit of a rest” and the bottom of her garden is left wild which allows the orchids to thrive. It is a haven for wildlife with plentiful butterflies, bees and birds. When I was speaking to Mrs Williamson she paused as a young sparrow hawk settled on the wall just outside her window.

Corinne and Nick Sutton retired three and a half years ago to their home at Saint-Maurice-la-Souterraine, Creuse which had a two-and-a-half-acre field covered in weeds. Since then they have transformed a large part of it into a garden, leaving around an acre deliberately natural to maintain biodiversity.

Corinne Sutton loves roses and has started a collection: “I started with David Austin roses but have added French varieties. I also have a collection of peonies. “There is also a bed with grasses, raised vegetable beds, shrubs, fruit trees including cherries and I have started a natural arbour with willow which you weave together as it grows. We have installed a natural bee hive. This is made out of a tree trunk and will hang in a tree. The aim is to attract a local swarm of bees, to help save their declining populations.”

She adores gardening and has enjoyed finding what works in France: “I think the biggest challenge has been coping with the very hot, dry summers, especially when there is a hose pipe ban. You bring a lot of your own gardening knowledge with you, but then have to adapt. “In the UK you want everything neat and tidy, hear you can have it a bit rougher, and of course the gardens are much bigger.”

Four gardens at Ahun, Creuse had planned to open over the same weekend. One is in the extensive grounds of Château La Chézotte, a five-minute drive from the village, where there are several trees over a hundred years old and an exact reproduction of the grotto of the Virgin Mary at Lourdes.

Three are in the village. There is a sheltered garden with a fishpond and two permaculture gardens. Laurent Willig has fifteen very high raised beds which means he can continue to garden, despite a bad back: “I came across a book, Potager-Les idées du jardinier paresseux by Canadian Larry Hodgson who calls himself ‘the laidback gardener’. He uses this system to get earlier crops but for me the advantage is the height of the beds so I can sit on a stool and garden for long periods without getting tired.”

He grows fruit, vegetables and herbs and says he can grow the same amount as a classic garden. He also loves to experiment: “The plants are close together so growing the right combinations is important, so for example I grow strawberries with leeks and sweet corn with beans. “I have also tried wool on my beds as a friend gave me ten bags he would otherwise have burnt and found that laying it on the soil is a perfect way of blocking light and getting rid of weeds before sowing.”

He has a polytunnel which is half buried so that you go down into it and can garden standing up. He also grows several plants up vertical supports including courgettes, beans and peas.

Read more: How Covid-19 could have positive impact on food in France