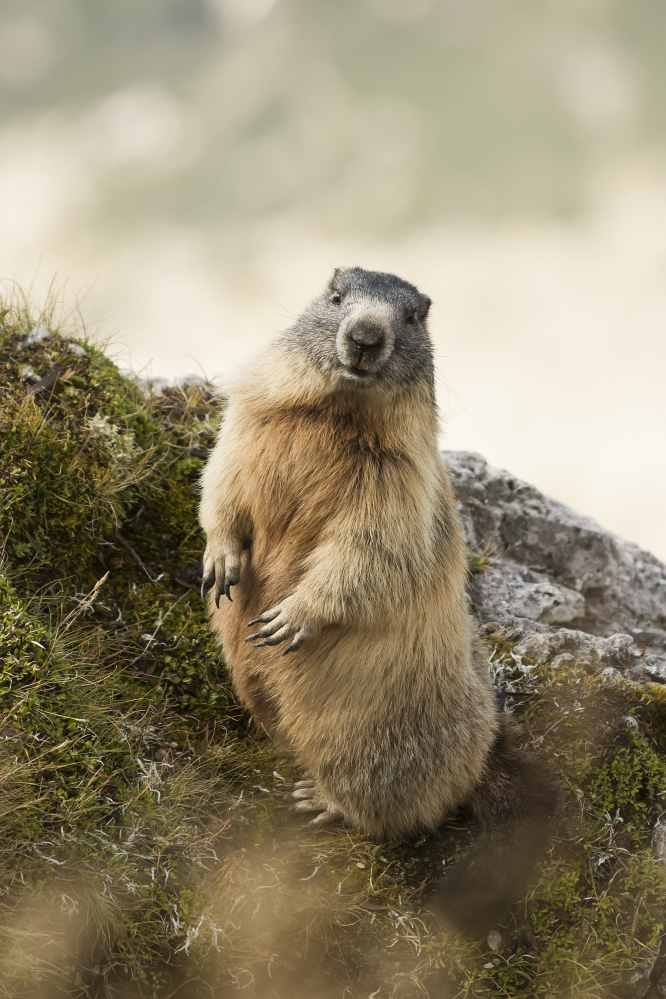 Alpine marmots are easy to observe but difficult to approach as they are easily frightened Pic: Nomade-photo.eu / Shutterstock

France is a great place for wildlife. It has wonderful birds and mammals to see and learn about – and some are surprisingly easy to find. We give 10 wildlife excursions to try now travel within France is possible again. But be prepared for surprises: the movements of wild animals are not always predictable!

Sinister prowler of the hills or conservation success story? You decide. The wolf was declared extinct in France in the 1930s but returned in the early 1990s, stealing through the mountains across the   Italian border. Since then, it has steadily moved deeper into central and southern France.

Whereas shepherds in eastern Europe have always had to co-exist with wolves, their counterparts in France resent their reappearance. According to the popular press, individual wolves are losing their   fear of humans and approaching villages, but the truth is that humans are more of a threat to wolves than vice-versa.

Location: Mercantour National Park (Alpes-de-Haute-Provence and Alpes-Maritimes).
Watch it: Spotting wolves is not easy but Responsible Travel will do its best to put you in the right place.

2. Brown bear (Ours brun, Ursos Arctos) in the Central Pyrenees

The last native adult bear in the Pyrenees, Cannelle (a female), was killed by a hunter in 2004. All the 40 animals that inhabit the Pyrenees are the result of a programme of reintroduction using bears   brought from Slovenia.

Like the wolf, the bear is a highly controversial animal in France. Shepherds complain that bears sometimes kill sheep but, despite legends, bears are not a threat to human beings. They do occasionally   approach villages at night, but only if there is no one around and they will always flee at the first sign of human presence. The bear is at once France’s most spectacular wild animal and the one you are   least likely to see.

Location: Central Pyrenees
Watch it: You have little chance of intentionally seeing a wild bear but you can at least imagine it, as you hike through the beautiful slopes and valleys of the Pyrenees

3. Sperm whales along the French Riviera

Watching sperm whales from the deck of a medium-sized boat is a memorable experience but tourism can disturb these sensitive animals and you have to go with a recognised company that has ethical   standards.

A square portion of the sea from the French Riviera to the north coast of Sardinia provides a haven for whales in the Mediterranean. The Association Souffleurs d’Ecume (Foam-Blowers) has created a   quality label to regulate the trade in France. If you are lucky, you will see a sperm whale or a fin whale, dolphins, turtles, tuna and manta rays.

4. Alpine marmot (Marmotte, Marmota marmota) in the Pyreenes and Alps

This cute-looking ground squirrel is related to the North American groundhog or woodchuck. It is native to the Alps and was reintroduced to the Pyrenees in 1948, having disappeared at the end of the last Ice   Age.

It’s now abundant and is mostly found living in sunny alpine pastures between 800m and 3,000m. It is active between May and August. In autumn, marmots go into hibernation in their burrows that may be 3m  deep and extend for 10m in length.

Location: Pyrenees, Alps
Watch it: Marmots are easy to observe. Locals will tell you where to have the best chance of seeing marmots but approach with stealth – be still and be patient. Marmots are constantly alert for intruders and at   the first sign of danger, they warn their kin with a cry and scurry into their extensive burrows.

5. Butterflies in the south of France

France has an astonishing 260 species of butterfly, not to mention a host of other fascinating insects if you stop and look. Most butterflies live in the warmer south, roughly below a line drawn from   Bordeaux to the Alps, and fly in early summer.

You can see some great species just by standing still in a garden or roadside: some common ones are stunning (such as the scarce swallowtail, which is not so scarce) or fascinating to watch (the bee   hawk-moth behaves like a hummingbird).

Location: Everywhere, although wilder places in the south are best
Watch it: To see butterflies in profusion and learn about their lifestyles, go on a trip led by an expert guide. Greenwings runs such trips to the Pyrenees, the Vercors or the Alps.

In cartoons, vultures are always shown as villains, perched on dead trees waiting for living things to die. In fact, they perform a public service. They are nature’s cleaning patrol, decluttering the   countryside of rotting carcasses.

You are far more likely, however, to see them in the air. A vulture has a wingspan of up to 2.8m and you will often see them gliding on thermal currents of air around crags but usually too far away to   make out the details. Fortunately, there are several observatories that allow you to get a closer view.

Location: Natural Regional Parks of Vercors and Grands Causses and other locations in the southern French Alps and Pyrenees
Watch it: Falaise aux Vautours in Aste-Béon or Maison des vautours in Le Truel

Depending on where you live, there may be no need to go anywhere to see these large, graceful birds. Twice a year, they fly over a large swathe of France. The first sign of their presence is often their soft  gurgling flight call to each other as they maintain their elegant V-shaped formations.

They go north between February and May in diagonal lines from the western Pyrenees across France and return south towards their wintering grounds in Africa in September–December. The days on which  they fly depend on the skies and the weather.

Location: To see cranes in one spot, go to Lac du Der-Chantecoq, Champagne
Watch it: Cranes flying overhead are visible to the naked eye but you will see more with binoculars

If there is one bird that everyone can identify, it is this one, distinguished not only by its size but also by its distinct black and white markings. It is usually silent except when it utters its noisy beak-   clappering call. It nests on roofs, towers and other tall structures. It will happily nest on platforms provided by conservationists.

The stork is the symbol of Alsace and is held to be the bringer of good luck. “When the storks are here, all is well with the world,” runs a popular saying. In 1974, there were 11 nesting pairs in the whole   of France; now, there are estimated to be 2,000-plus.

Location: Alsace (several towns have “stork parks”) and Charente-Maritime (notably the marshes around Brouage)
Watch it: Storks are easy to see at close quarters in villages, towns and even Strasbourg

They may be common and often a nuisance – digging up lawns while sniffing for acorns, damaging crops, and stepping in front of cars on lonely roads – but these heavy-duty pigs are France’s most   conspicuous of the large animals. Locals, especially hunters, will know all about their habits.

Location: Almost everywhere, especially where they are not wanted
Watch it: Keep your eyes open, especially at dawn and dusk, and you might see them out of the car windows – but keep your distance.

Whether seen individually or as a flock, flamingos are beautiful birds. Grace itself. Huge numbers of them cluster in the coastal wetlands of the Camargue and the Languedoc.

Some birds overwinter here but many migrate to Spain or Africa. They feed by trawling the bottom of shallow lagoons for vegetation and crustaceans. It is the aquatic invertebrates that they eat, rich in   carotenoid pigments, that give the birds their distinctive pink colour.

Location: Lagoons of the Camargue and the Languedoc coast
Watch it: The best place to go is the Parc Ornithologique de Pont de Gau, which has 2.8km of footpaths to follow to see the best view of the birds. Entrance is €7.50, or €11 for a guided tour.