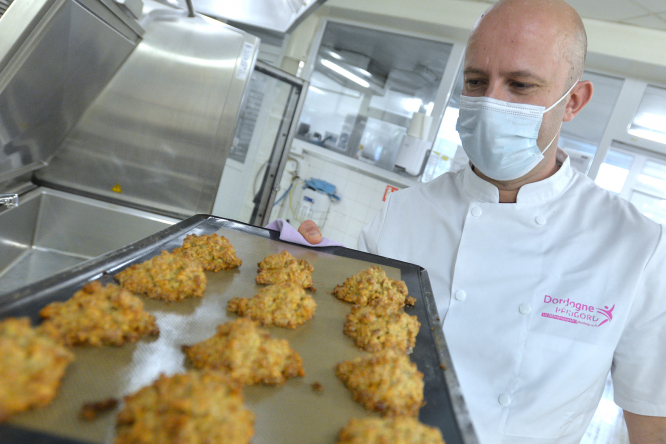 'Obesity is a problem and with Covid-19 we know that increases risks for children. We are all responsible. You, me, everyone, because we don’t speak out' Pic: Denis Nidos

Nicolas Lamstaës, worked for years with Michelin 3-star chef Alain Ducasse. He ran his own restaurant for seven years, and was awarded a Bib Gourmand by the Michelin Guide. He took on a very different cooking challenge when he was taken on to turn cité scolaire Alcide Dusolier’s kitchens into France’s first 100% organic canteen in a combined collège and lycée. He told told us what difference being organic makes:

The biggest change is that vegetables and fruit no longer come out of tins. Before the pupils ate very little fresh food, and mostly, excuse the expression, crap products. Now everything is homemade in our kitchens.

Nearly all our vegetables, fruit and meat comes from nearby, either the Dordogne, the Haute-Vienne, the Gironde or other close departments.

70% comes from local producers. The remaining 30%, includes ingredients like pasta, tomato purée, and certain spices which come from other regions of France or the world.

So what is a typical meal on the menu?

Yesterday, was a vegetarian day, and the main dish was a lentil dahl served with sweet potato roasted in the oven and bulgur wheat.

Today the starter is hummus made with chickpeas. I have travelled quite a lot so I like to offer the students food from different countries. Then we have Marengo beef, made with meat from the Périgord, onions, mushrooms and the season’s first tomatoes served with a tian of courgettes, potatoes, garlic and herbs. For pudding there is a mousse made using aquafaba, the cooking liquid from chickpeas which can be used as a thickening agent instead of eggs, and local strawberries. Often for dessert we offer different cut fruit such as apples, bananas and oranges. That is always popular and pupils can come back for more as many times as they like. We always try to have something for vegetarians. So today there are galettes, made from yesterday’s left over lentils.

We often have themes. We have held Indian evenings for the boarders and next week we will have a Great British and Irish theme with coleslaw to start with, followed by fish and chips, and apple pie and carrot cake for pudding. Because we are working with what is available and in season from day to day we often make changes at the last minute, as the producers do not always have what we had planned for the day.

How have the pupils reacted to the change in school meals?

It was not at all easy for them because they were so used to the industrial food they were served up before, with high levels of salt and sugar. Five months in, I would say around half are won over, but the battle is still not over. Also they are teenagers, so it is more difficult to win them over. It is much easier to start young in nursery and primary schools.

Have the staff appreciated the changes?

They are really, very happy. There was a great deal of preparation beforehand, where they were given lessons on healthy eating, and now they have really understood the importance of what we are all trying to do.

We have music on while we work and there is a great ambiance. It is important for the pupils. When they come to the canteen and they hear the music and see the women, as it is mostly women, dancing, it is a good moment. Life is stressful and it is good they can come to eat in a place where there are no worries and people are happy.

I have two children, they are very young, and though the future is grim, I hope at least they will be able to eat well.

Does it cost any more than meals served up in conventional canteens?

It costs less than it did before. One reason is there is very little waste. When we serve orange juice we freshly squeeze the fruit and then keep the rinds to be cut into strips and use in marmalade.

Any other leftovers go to our compost. We have just begun a vegetable plot and eventually hope to produce some of our own herbs and vegetables. We try to be eco-responsible at all levels.

We have the Ecocert label and we have to respect their rules to adhere to the status. We use very little plastic. Any packaging for bought products is nearly always cardboard.

Another reason for lower cost meals is that because we use local producers, there are no intermediary agents to pay. It also benefits the local economy. Producers are very happy to supply to the school.

Does that require a great deal of organisation?

Yes, at first it did. It was a huge project, but like everything else, once it is in motion and everything is worked out, it is not any more difficult than any other system.

Why did you decide to switch to work in a school canteen?

I had a personal conviction it was the right thing to do. I did not find any more satisfaction in serving gastronomic meals, and I was worried about the state of the planet we are handing on to our children.

There is a pre-conception that working in a canteen is an unskilled job and as someone who comes from the world of gastronomic cooking, I can confirm that is not true. It is different, but I take a great deal of pleasure in cooking simple food in big quantities for children.

Do you think children eat badly in French schools?

Not everywhere of course. But a large majority eat badly. They might think eating a cordon bleu with all the chemical products, additives and sugar in it tastes good, but it is not good for them.

Food is often prepared in central kitchens where staff have to cater for very large numbers. The ideal is to have a cook for each school. The lobbies destroy everything.

What do you mean by lobbies?

The lobbies behind the big industrial companies who produce tinned food. Public money is used to pay huge companies for food in canteens which are giving ‘poison’ to our children.

Those are strong words?

Yes, but it has to be said. Obesity is a problem and with Covid-19 we know that increases risks for children. We are all responsible. You, me, everyone, because we don’t speak out.

The only solution is to serve local food, as much organic as is possible and to give out money to local producers and the people who work in the canteens.

It is a job which you enjoy?

Honestly, I love it. I am more in the role of trainer than of chef. I teach but I learn a great deal from the staff as well.

I hope more chefs from restaurants will be attracted to work in school canteens, which are undervalued at present. I hope there will be more canteens serving up 100% organic, local, homemade food.

food and drink
education
More from Interviews
More from Connexion