Not an average day in the office for French movie stuntman 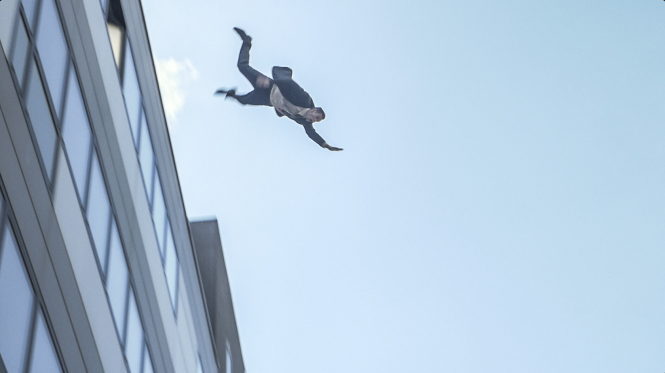 Jérôme Gaspard trains three to four hours every day. He has to able to climb, fight, dive, swim, fall from a high height, fall down the stairs and be set on fire
By Jane Hanks

It is a profession which is not well known by the public. We work in the shadow of big actors.

They get their names on the posters, but we do not and there are no awards for us. Make-up and hairstyling artists can get an Oscar, but not us.

How did you become a stuntman?

When I was young, I was a gymnast at national level and a friend persuaded me to join him working as a stuntman at Disneyland, Paris. I was 21. After that I decided to make it my profession.

How much training do you have to do?

I train three to four hours every day. You have to be able to climb, fight, dive, swim, fall from a high height, fall down the stairs, be set on fire.

There is not really any other physical job where you have to be so good at so many different things.

In the world of sport, you focus on one skill. We have to be good at everything, not to an Olympic level, but to a very high standard.

Which stunts are the most difficult?

Falls from great heights above 15m are dangerous and falls down stairs are painful. One of the hardest is to be a pedestrian hit by a car, because how you will be hit is unpredictable. Being a human torch is also difficult and dangerous.

So is it really dangerous?

Yes, it is a dangerous job. But we prepare in advance. The risk of dying is very rare, but getting hurt is much more likely.

But as our bodies are our work tools we take care of them. If we think we might break a leg in a stunt, we will work out another way of doing it.

Swimming can look easy but it is often the conditions you are working in which are difficult.

You might be dressed which makes it harder in the water, and it might be the middle of winter in the sea and so you are freezing and you can be there for hours during the shooting of the scene.

For example, if you have to fall into the River Seine in December and the current is really strong, it becomes much more difficult than jumping off a bridge into a river in the summer when you are young, for a dare.

Have you ever had a bad accident?

No, I have been lucky. I have broken my nose, burnt myself lightly and had plenty of bruises and cuts and black eyes.

My worst accident was snapping my Achilles tendon – afterwards I could not work for six months. But never anything serious.

Are you ever frightened?

I am always frightened. If I have a big stunt I sleep badly the night before, going over and over the details to make sure I have thought about everything that could go wrong.

That could be as simple as being put off by a light shining in my eye.

But after it is over and it has gone well I feel super happy. It makes you feel alive.

I am starting to get more involved in production, working out how stunts can be done by a team in the safest way, but I think I have about three years more left when I can do stunts. I am increasingly selective. Last week, though, I did a fall of three metres on to a car roof.

Falling 3m on to a car does not give you a soft landing. How do you do it?

We weaken the structure of the roof by cutting the supports a little so that the roof will cave in more easily when I land. But I have to be careful as though I have protective clothing for my back, there is nothing for my head. “ If I have a big stunt I sleep badly the night before, going over and over the details to make sure I have thought about everything that could go wrong.

What are your best memories?

I like high falls, probably because I am a trained gymnast. My highest ever was from 30 metres.

I loved working on a recent Netflix film, Six Underground, by Michael Bay, because it was different and I had the chance to drive cars and motorbikes which I don’t usually do. I was with a big American team and they wanted me for everything. In my first scene I was knocked down by a car. Every day was different and it was very intense.

How did you learn the different skills?

I learnt from other stuntmen. Now there is a school in France and the students are lucky because they have teachers with a great deal of experience in the job. They also have the infrastructure. When I learnt, there was nowhere to practise high jumps – they have special structures 10 or 15 metres high in the school and big mattresses to fall on.

It is better, because the more they can train in good conditions, the better stunts they can perform to please the public.

Is there enough work for stuntmen and women?

France is not the best country for stunt doubles. In the 1980s and 1990s there were a lot of action films but now there are very few.

The introduction of platforms like Netflix helps because they are making films. England is El Dorado for stunt men and women in Europe, because many of the USA films are made in their studios because they offer generous tax breaks. Star Wars and Avengers were filmed there and Game of Thrones needed so many stunt doubles there was a shortage. So we can get work there.

It must be a dream for many young people to be a stunt double. Would you advise them to do this job?

Yes, but first I would want to make sure they understood how hard it is, and that they want to do it for the right reason, and not to become famous.

We are rarely the heroes, instead we are the ones who make the stars. Even though I want more recognition for the work of stunt doubles, it is because I would like to be taken seriously on set.

The day I fell from three metres on to a car was the day after I had been filming in Belgium up until 6am in the morning. I went straight from there to catch the train and arrived at 1pm the next day in Paris, as I had to be on set at 2pm.

I was on time, but they did not film my scene until 12 hours later, so they didn’t need to call me in so early. I had to find somewhere to sleep on the ground covered by my coat. They would never have treated an actor in that way.

You like this job though. What is it that you enjoy?

I would not change it for anything. When I wake up I am happy to go to work. I hear so many people saying they hate Mondays and love Fridays because it is the weekend. So many people spend 70% of their life working in something they are not interested in. I realise it is a luxury to be someone doing a job they love.